Prep football: Monroe falls in 2A state semifinals
Share this
{{featured_button_text}}
1 of 2 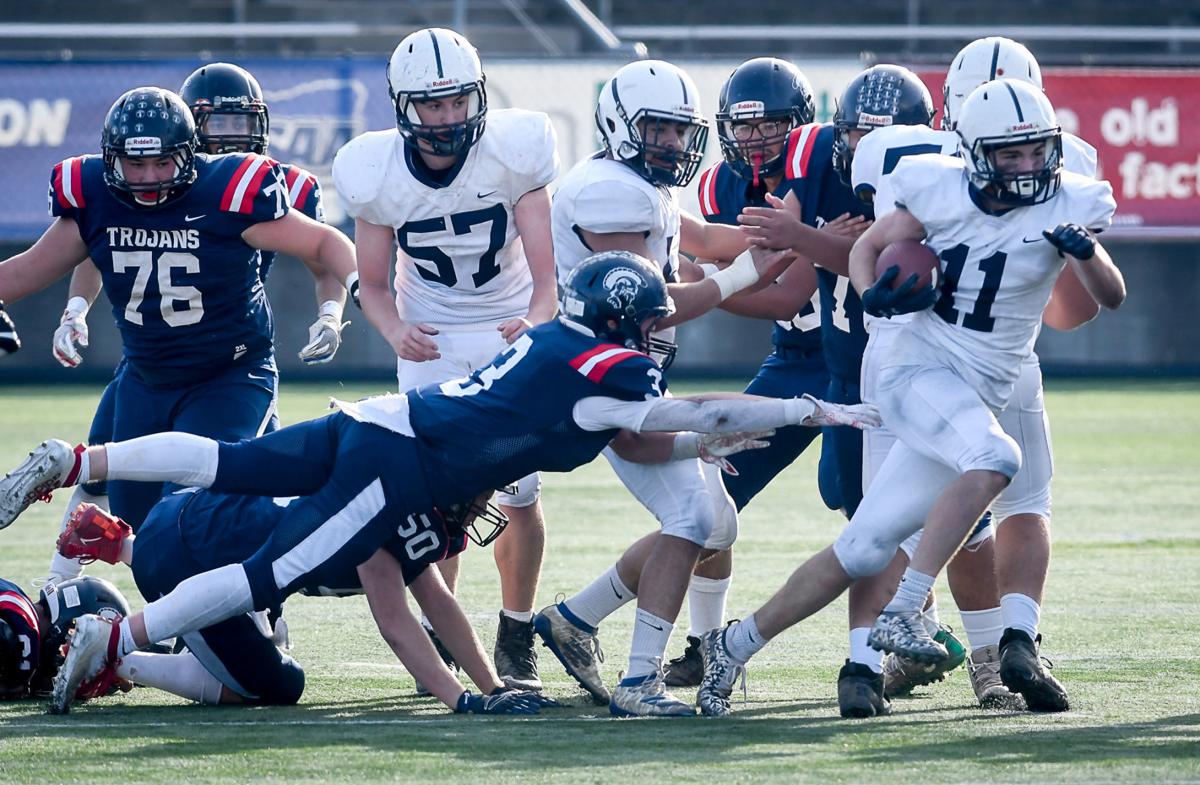 Monroe's Zach Young carries the ball during the Dragons 15-12 loss to Kennedy in the 2A semifinal game. Young rushed for 163 yards in the game. 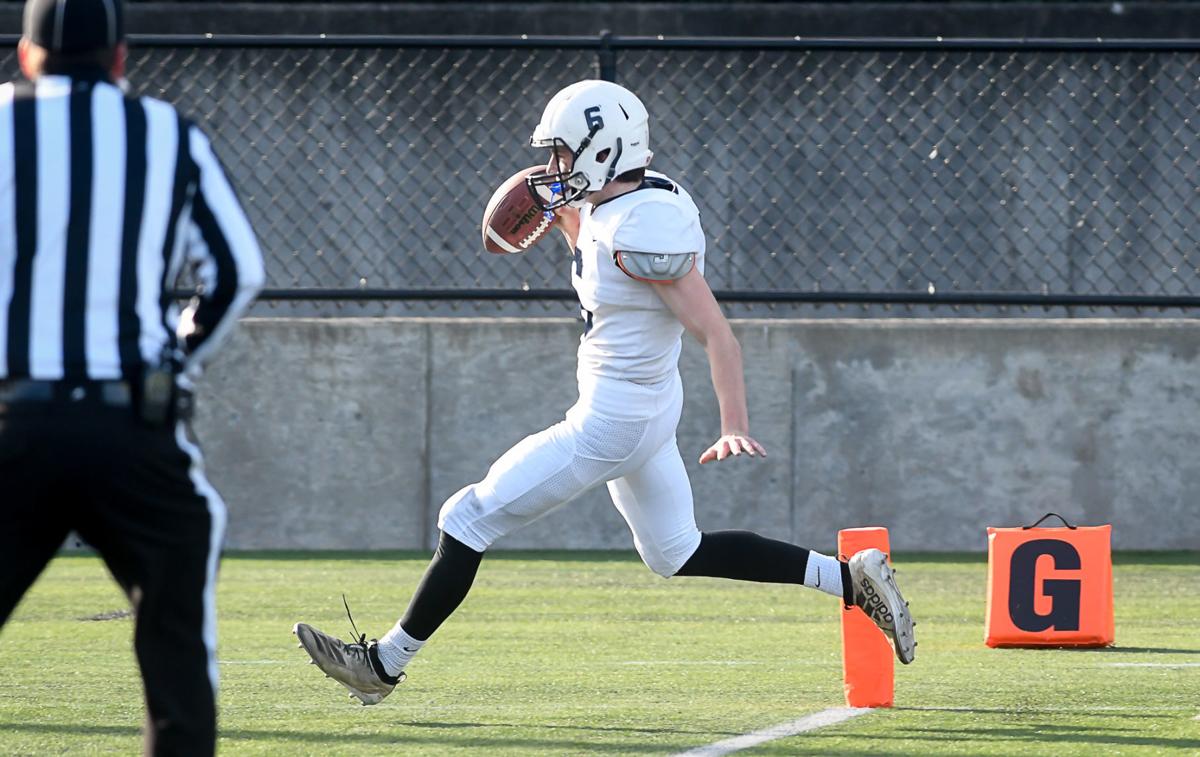 Monroe's Brody Ballard scored both of the Dragons' touchdowns in their semifinal loss to Kennedy.

HILLSBORO — Zach Young did nearly everything a player can do on a football field Saturday as he desperately tried to make his high school career last one more week.

But Young and Monroe High came up just short of a trip to the 2A title game as they gave the top-ranked team in the state all it could handle. The Dragons fell to Kennedy 15-12 at Hillsboro Stadium and saw their season come to an end in the state semifinals for the second year in a row.

After a tough first half in which they couldn’t get their offense going, the Dragons came to life in the second half and scored 12 unanswered points to take the lead with just over three minutes left in the game. But Kennedy quarterback Dylan Kleinschmit found Brady Traeger for a 27-yard touchdown with 41 seconds to go, and the Dragons were unable to orchestrate the final scoring drive they needed.

“We came out and played as good as we could play and competed,” Monroe coach Bill Crowson said. “I thought we battled back from a first half that really didn’t go our way — we made some plays and did what we needed to do to make it tight and give ourselves an opportunity. That’s all you can really ask for.”

Young, who has racked up over 7,000 yards and 100 touchdowns during his four-year prep career, finished the game with 163 rushing yards on 25 carries to lead a Monroe offense that was held to 297 yards on the day. He finished with an interception and six tackles on defense, recovered his own onside kick at the start of the second half, and kept Monroe’s final scoring drive alive when he faked a punt on fourth down and rushed for nine tough yards to move the chains.

“It’s been a blessing going out and putting on the Monroe jersey these last four years and just representing my hometown,” Young said. “Playing with these guys has been great. I just wish we had one more game.”

In 2017, the Dragons won the state title, thanks in large part to a group of eight then-sophomores that featured Young and a host of other talented players. But as the years went on, many of those players either transferred to larger schools or stopped playing football. By Saturday, only Young, Darren Parker and Gavin Marschall remained from that group.

“It just wouldn’t have felt right if I wasn’t wearing a Monroe jersey,” Young said of his decision to stay. “I could have bailed — I could have gone with the other kids to bigger schools. But I chose to stick here and just represent my hometown to the best of my abilities. All glory to God for that.”

Neither team was able to find its offensive rhythm early Saturday — Monroe’s first three drives resulted in turnovers, while Kennedy gave the ball away on its first two drives. The Trojans broke through just before halftime on a 1-yard run by Kleinschmit to take a 7-0 lead.

But Monroe found life immediately in the third quarter when Young recovered his own onside kick to open the half. Two drives later, Monroe sophomore quarterback Brody Ballard broke loose up the right sideline for a 47-yard touchdown to get the Dragons on the board. The ensuing point-after was blocked, though, and Monroe was left trailing 7-6.

The Trojans marched 52 yards over seven plays on the following drive and worked their way into a first-and-goal scenario as they threatened to take a two-score lead. But the Dragons answered with four consecutive stops, including a massive solo tackle by Ricky Ramos on fourth down, to force a turnover.

Two drives later, the Dragons took what they hoped would be a decisive lead when Ballard scored on a 1-yard run with 3:01 to go.

“It’s just tough coming up so close and being that short,” Ballard said. “When we got that touchdown, I thought we might have it, I thought we were gonna keep it. But then it’s just one play.”

On Kennedy’s final drive, the Dragons forced a fourth-down scenario, and then a third-and-10 situation, but the Trojans escaped each time to set up Kleinschmit's game-winning pass.

Dylan Irwin led Monroe with 10 tackles and also added 74 rushing yards and Ballard had 50 total yards, two touchdowns and recorded a sack on defense. The Dragons end the season 10-2.

“Every week with these guys were great,” Parker said. “Just supportive, everyone pushed each other to get better. We’re such a close team. We’re a family.”

LEBANON — In three minutes of game time, Lebanon went from battling back from a small deficit to being in full control.

The Corvallis High girls basketball team was reduced to playing much of Friday’s game without two of its top players, and for much of the even…

SWEET HOME — Year in and year out, Sweet Home and Tillamook produce some of the top prep wrestlers Oregon and both teams are typically in the …

Monroe's Zach Young carries the ball during the Dragons 15-12 loss to Kennedy in the 2A semifinal game. Young rushed for 163 yards in the game.

Monroe's Brody Ballard scored both of the Dragons' touchdowns in their semifinal loss to Kennedy.