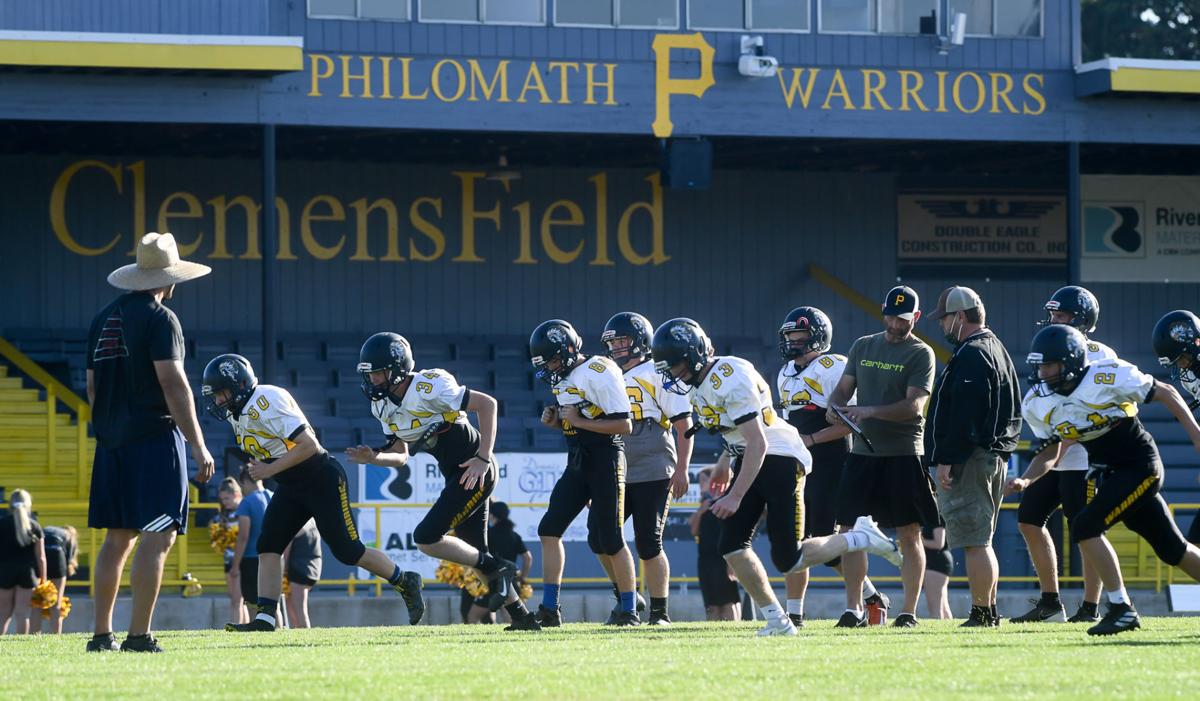 Philomath players run through a drill during practice on Wednesday. 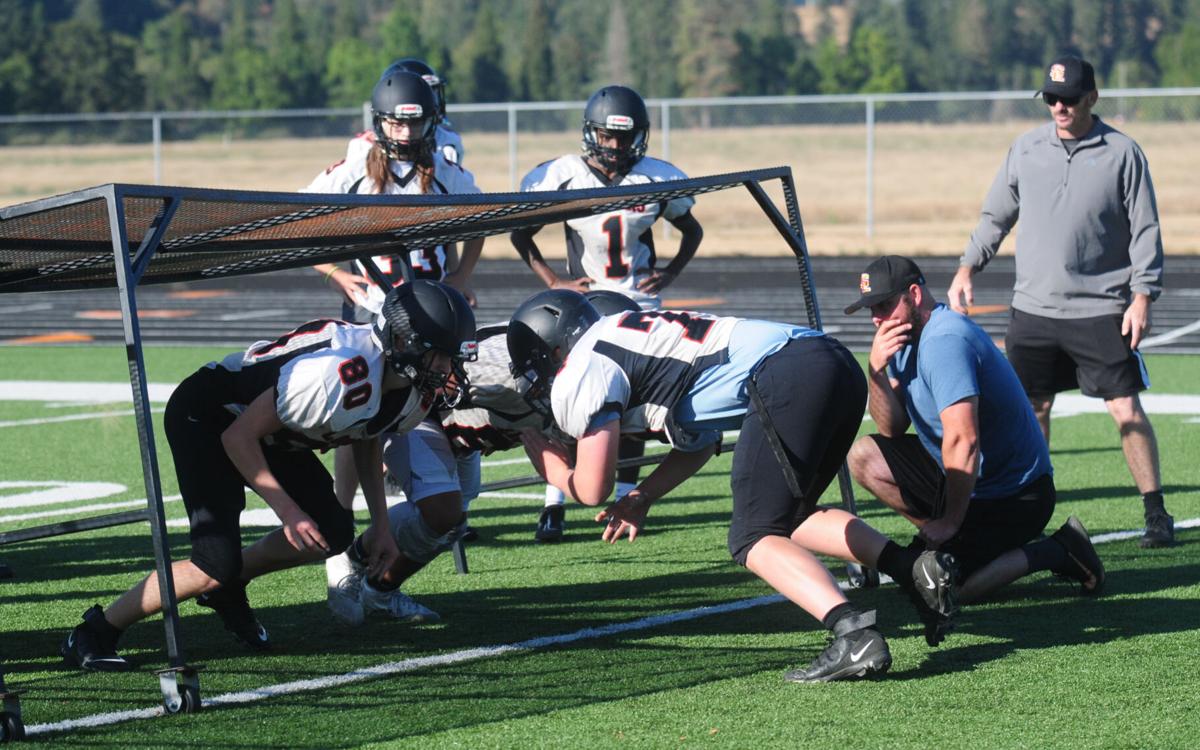 Scio head coach Justin Guest, kneeling, and assistant coach Matt Parazoo oversee a blocking drill. The Loggers will be counting on a strong sophomore class this season as they have very few upperclassmen on the roster. 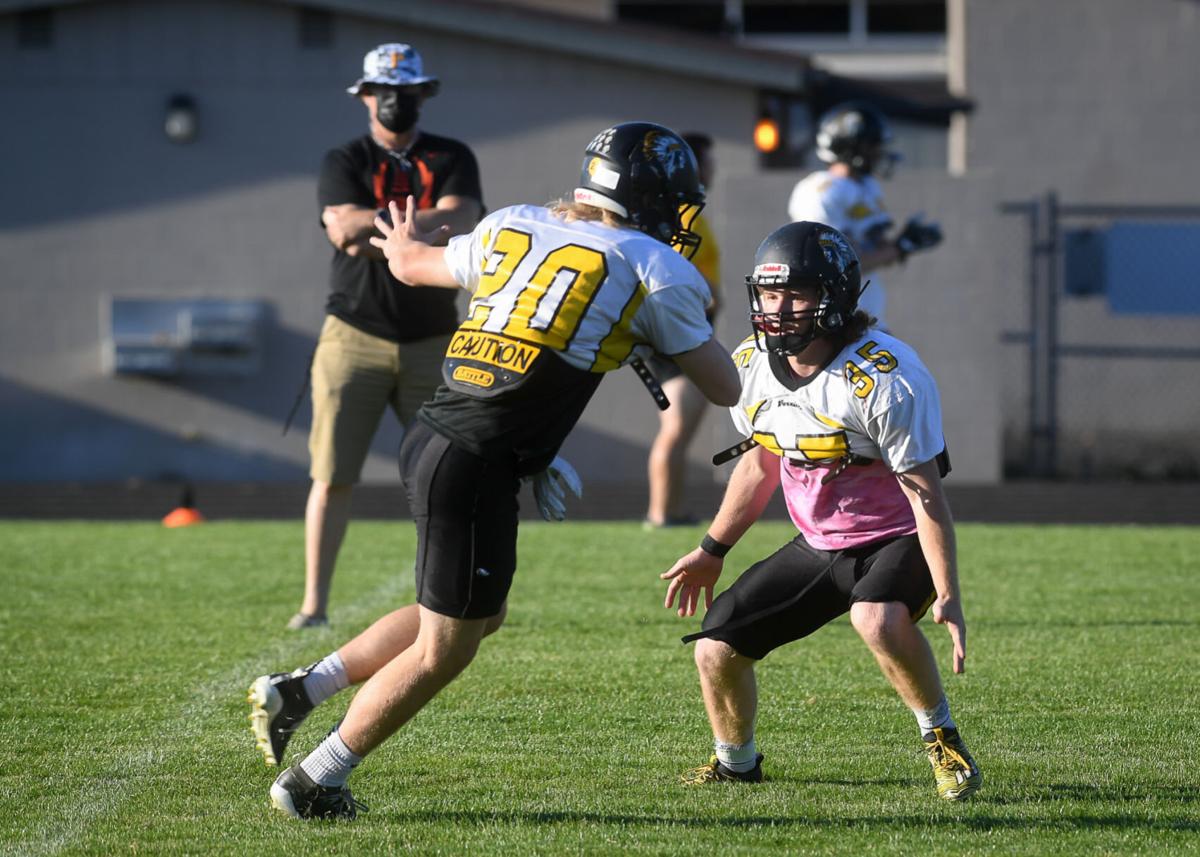 David Griffith, right, runs through a defensive drill during practice. Griffith will also be the Warriors' featured running back this season and he is enjoying the new system installed by head coach Alex Firth.

After 18 years as an assistant coach, Alex Firth is spending his first fall camp as a head coach.

Firth, who spent those years as the offensive coordinator at Crescent Valley High School, is preparing the Philomath squad for its opener Friday night against Valley Catholic.

“It’s good. It’s a lot of administrative duties that I probably wasn’t prepared to take on. I kind of knew that going in. But it’s fun. You kind of get to do what you want to do, so it’s nice,” Firth said.

Throughout those years as an assistant coach, Firth never gave up on the idea of becoming a head coach. But his family was settled in Corvallis and he wasn’t willing to move in order to pursue that opportunity. That required patience as he waited for a local opening at Corvallis, Crescent Valley, Santiam Christian or Philomath.

“There were only four opportunities, really,” Firth said. “Honestly, I didn’t know if any of these would open. This (Philomath) opened this year and I threw my name in the hat.”

With nearly two decades of experience as an offensive coach, he comes to Philomath with his own unique system fully developed. It uses elements of both spread and power systems that he has melded together. He believes in this approach because he can adapt it to the talents of the players and to the opposing defenses.

Junior running back David Griffith is expected to be the primary ball carrier for the Warriors this season. He missed a couple of games during the spring season due to a shoulder injury, but after his return he helped the team to a 4-2 record during the shortened season.

He likes what he has seen of the new system and thinks it is a good fit for his abilities.

“I think it’s going to work really well. I like the whole scheme, how our line blocks, I feel like it matches with my run style, being able to cut and stuff like that. I think it will create some really good lanes,” Griffith said.

Senior Caleb Jensen will start at quarterback. He was the starter during the spring season but is having to learn the new system. Firth said this offense requires the quarterback to make progression reads that other high school offenses avoid.

Jensen will have a number of talented receivers to target, including 6-6 junior Ty May, who will line up at tight end and as a slot receiver.

“I’m pretty excited about getting him in space and seeing what he can do,” Firth said.

Even though Firth is an offensive coach, the team may have more of a defensive identity this season. The team played a 50 defense last season, Firth said, using five down lineman and two linebackers as its base.

He is installing a 3-5 system with three down lineman and five linebackers. The defensive line has good size and Firth believes the Warriors can control the line of scrimmage and free the linebackers to make plays.

“We have a great linebacking corps, probably one of the better groups of linebackers I’ve been around in my career,” Firth said. “They’re aggressive, run to the ball. There’ll be some mistakes, obviously, transitioning to a new scheme, but I think they’re really the strength of the defense.”

Griffith said the spring season was very important for the program. Posting a winning record was a step in the right direction after going 1-7 in 2019 and 2-6 in 2018, with one of those wins being a forfeit.

“Good to win some games, turn things around,” Griffith said. “It was nice we had a season.”

Griffith’s personal goal for the season is to make the all-district team and perhaps make an all-state team if the season goes well.

The priority, however, is for the squad to make the postseason.

“I think all of us want to make the playoffs, that’s a really big goal, and keep going in the playoffs, honestly. Everyone wants to finish in first,” Griffith said.

While the Warriors are installing new systems on both offense and defense, stability continues to be the key for the Scio Loggers. Fourth-year head coach Justin Guest will continue to operate the double-wing offense which has become the school’s trademark.

Guest said the Loggers have run this offense for about 30 years and it was the system that was in place when he played for the school’s back-to-back 2A state championship teams in 2009 and 2010.

“A lot of knowledge passed down,” Guest said. “We’ve stuck with the same offense for 30 years, but we’ve also seen every defense and have adjustments for everything, just the same.”

The Loggers will be very young this season. The team started six freshmen in the spring and those players will play key roles this season.

Quarterback Bryan Parazoo was one of those freshmen starters and he returns with a season of experience under his belt. Cody Roofener, Tyson Wietman, Jackson Braa and Jaden Franklin are also part of the now-sophomore class that forms the core of the roster.

“He’s going to be a leader for us,” Guest said of LeFeber.

The Loggers have about 20 players on the roster, roughly half the number who were on the squad when Guest was part of the program.

Guest said participation has been down across the board in Scio sports with the COVID-19 pandemic adding to the difficulties. But he said numbers are inching back up this fall.

The Loggers open the season at Jefferson High on Friday night and play their home opener on Sept. 10 against Rainier.

With a very young roster, Guest has a simple goal for the season.

“We’re very young. That sophomore class is great. Just keep improving. There’s not really any expectations except to get better,” Guest said.

Is Sean Payton an early frontrunner for Coach of the Year?

Philomath relied on a stout defense, an aggressive running game and a handful of timely passes in a 32-12 victory over visiting Woodburn on Fr…

Philomath players run through a drill during practice on Wednesday.

Scio head coach Justin Guest, kneeling, and assistant coach Matt Parazoo oversee a blocking drill. The Loggers will be counting on a strong sophomore class this season as they have very few upperclassmen on the roster.

David Griffith, right, runs through a defensive drill during practice. Griffith will also be the Warriors' featured running back this season and he is enjoying the new system installed by head coach Alex Firth.