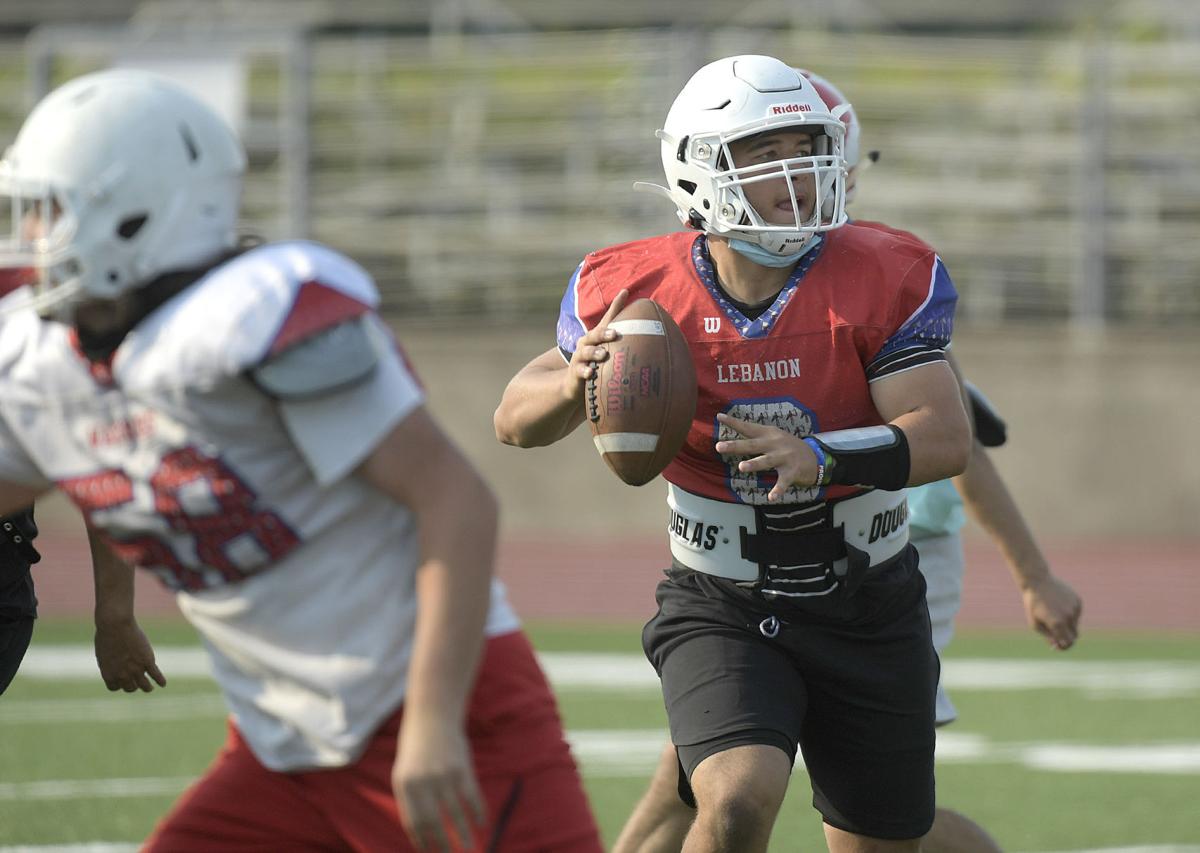 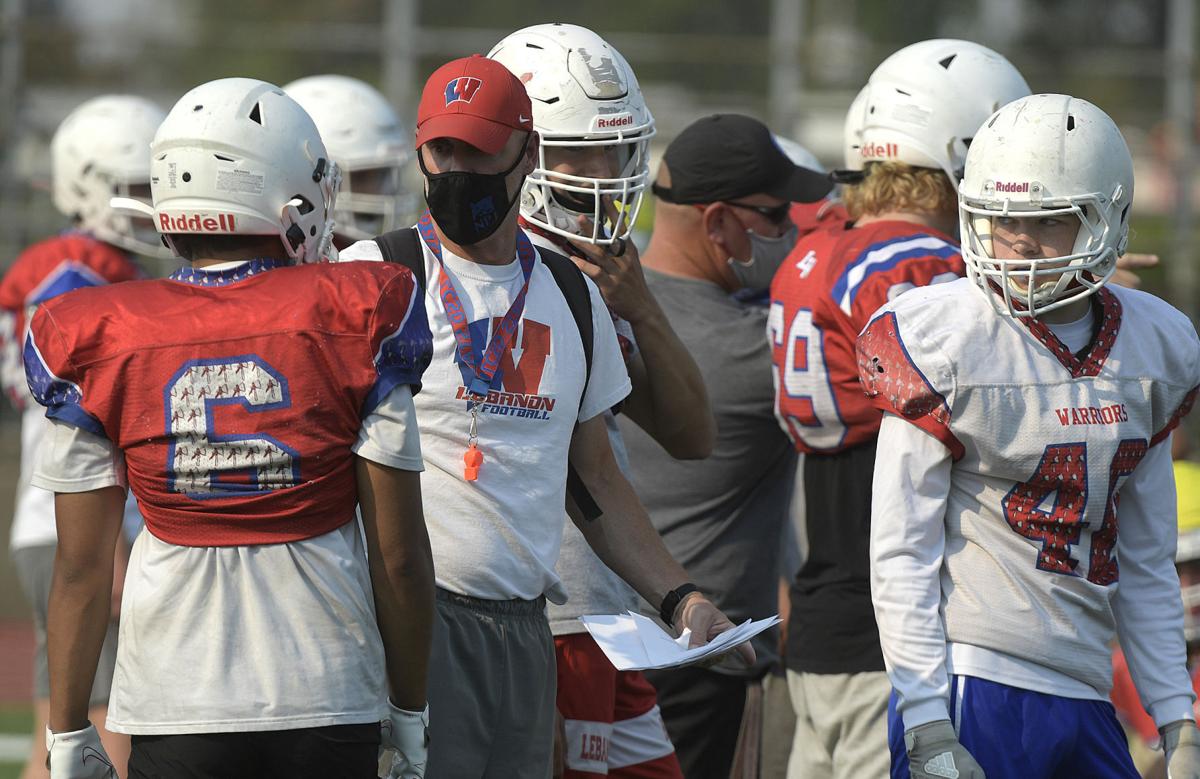 Lebanon coach Troy Walker talks with players during the practice. 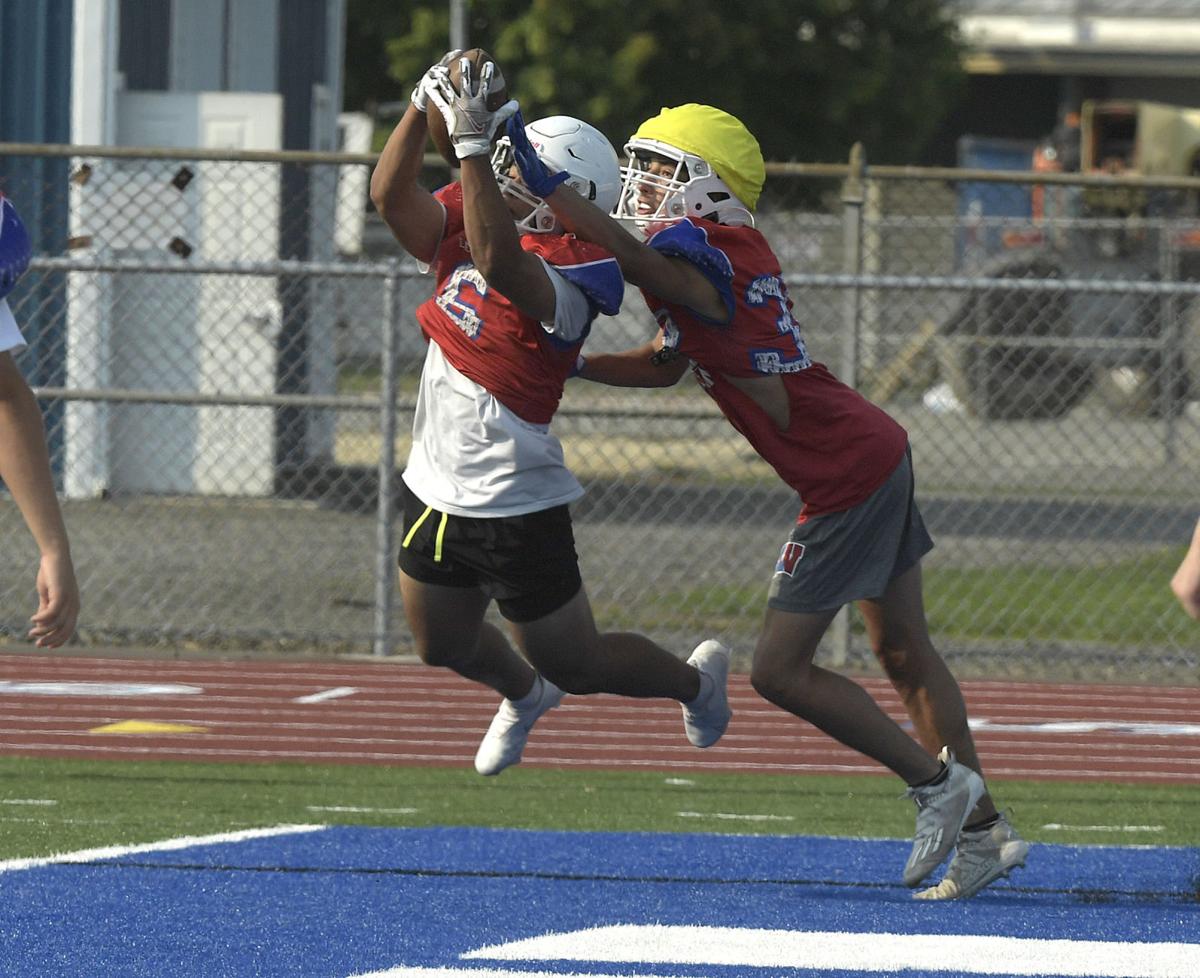 Lebanon's Waylon Wolfe catches a pass in the end zone in front of defensive back Izaak Agosto. 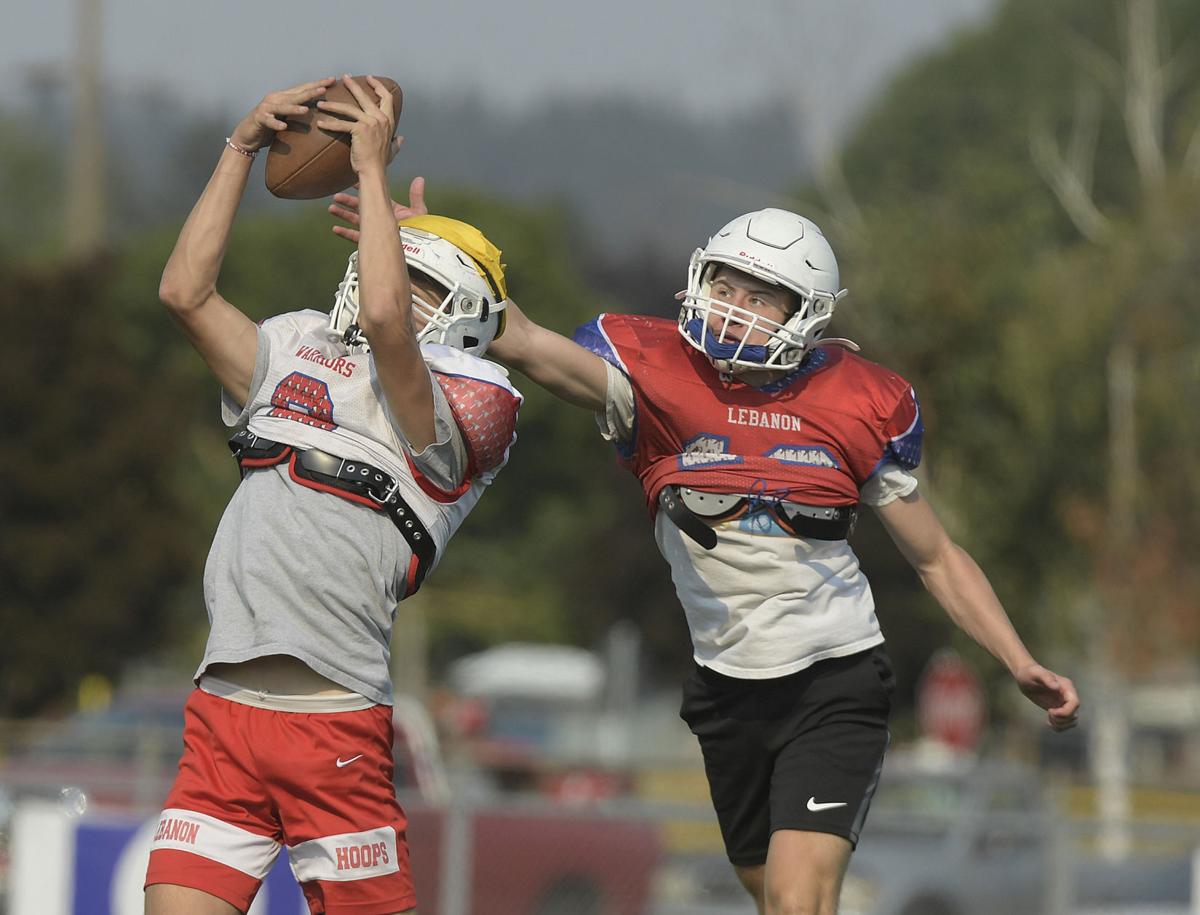 Troy Walker considers himself blessed to be taking over a Lebanon football program with a veteran coaching staff already in place and cupboards that are far from bare when taking a look at the roster.

A Lebanon alum, Walker had a strong turnout for summer workouts and saw 80-plus players show up for the first week of official practice.

Talented players, vast varsity experience and a strong work ethic are the foundations Walker is building from this fall.

“We don’t consider this a rebuilding project by any means,” the coach said. “We’re changing a few things, but the core of what we’re doing is going to remain the same.”

Leading the way for the Warriors is senior tight end/linebacker Waylon Wolfe, whom Walker describes as “a pretty special high school football player and has potential to do some stuff at the next level.

“Just his physicality (Walker estimated Wolfe at 6-foot-2 and 230 pounds because official measurements had not been taken). He is just that coach’s kid, super smart, super physical. In the high school game, if you have some size and speed and athleticism and you’re physical, it’s kind of fun to see.”

Added teammate Brayden Currey, who has played with Wolfe since middle school: “Mainly he just has a ton of heart and he just loves the game, and you can see it when he plays. He just loves hitting, and I’ve never played with a kid like him.”

Wolfe, who has fielded some interest from colleges about continuing his playing career, sees defense as a strength of the team. Particularly in the secondary, where there is some depth created by juniors and sophomores.

“We fly to the ball. We kind of have an attitude on defense,” Wolfe said.” We try to get all 11 hats on the ball every play, and I feel like we do that well.”

Junior wide receivers and defensive backs Brady Crenshaw and Colton Vandetta provide speed on the outside. Walker said the Warriors want to primarily run but he will see where that evolves as the season continues.

Junior Andreus “Dre” Smith is Lebanon’s No. 1 quarterback. But Smith is getting competition from senior Nathan Gourley, who has played well despite not being able to attend summer workouts.

“I feel pretty comfortable with either one at this point,” Walker said. “They both run the offense really well. They’re both incredibly intelligent. They know the nuances of the game.”

“He can do it all, whether he needs to hand the ball off or make a throw outside the pocket and shake off a few defenders,” Wolfe said. “It just opens up the playbook a lot more.”

Added Currey: “He has an arm on him. He can usually find a receiver pretty well. I feel like his decision-making is pretty good as a quarterback.”

Burton and Seibert look to be the team’s top two running backs while Currey and Vandetta will be primary pass targets.

Walker says his team is “a strong group of incredibly awesome kids who happen to be pretty decent at football.”

He sees the Mid-Willamette Conference as a difficult league with no bad teams. But with his team’s senior leadership, emerging younger talent and participation numbers that allow for competitive practices and good scout team repetitions, Walker has high expectations.

“We’re a playoff-caliber team,” he said. “We’ll let the wins and losses take care of themselves.”

Lebanon opens its season Friday at Wilsonville. The Wildcats are ranked second in the initial 5A coaches poll of the season. The Warriors received votes but were not ranked in the top 10.

Lebanon hosts 6A South Salem next week in another nonleague contest before starting Mid-Willamette (5A Special District 3) play Sept. 17 at Central.

Lebanon to present 9/11 Flag of Honor Across America event

The Lebanon Police Department and the Lebanon Fire District will present a 9/11 Flag of Honor Across America event at 9:02:57 a.m. Sept. 11 at…

Rankings are from the OSAA coaches polls

LEBANON — For one half it looked like Friday night’s matchup between the Corvallis Spartans and the Lebanon Warriors would be a defensive battle.

Lebanon coach Troy Walker talks with players during the practice.

Lebanon's Waylon Wolfe catches a pass in the end zone in front of defensive back Izaak Agosto.