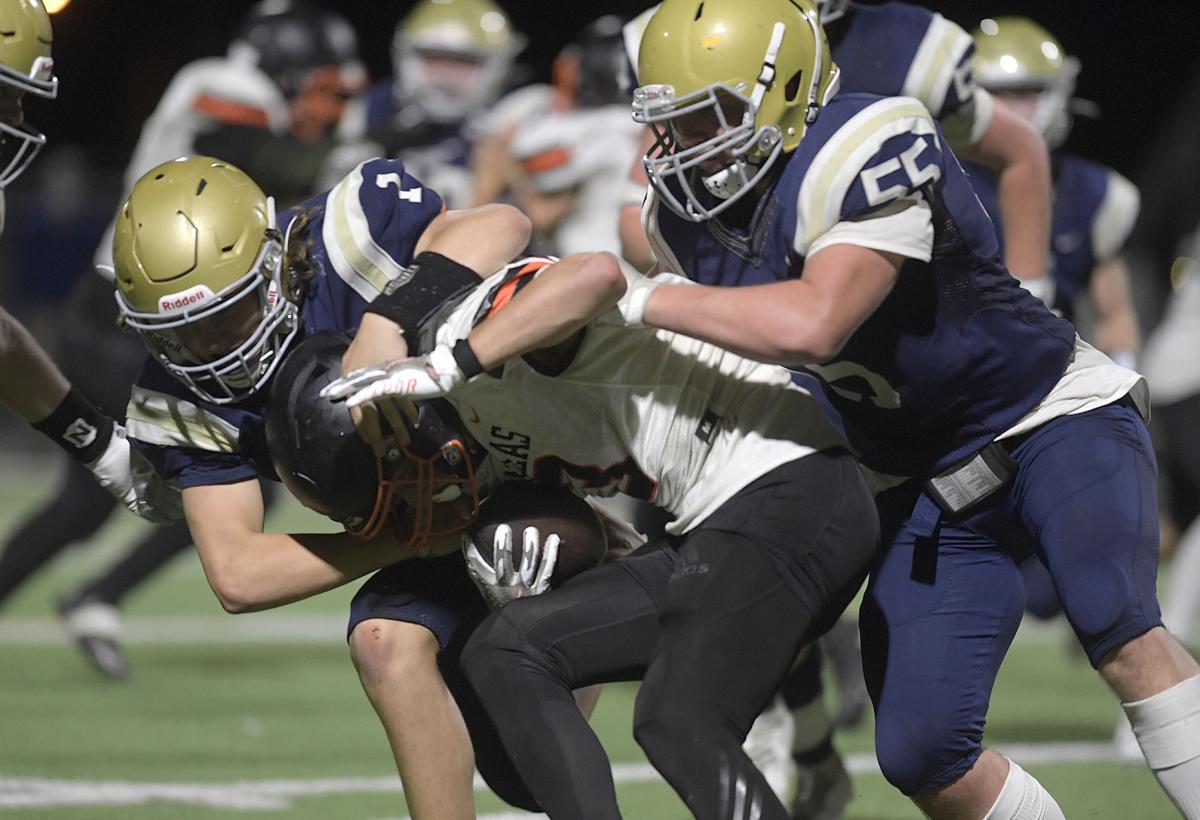 West Albany's Noah Reese (1) and Dakota Monson (55) bring down Dallas' Logan Person behind the line of scrimmage on a fourth-down play in the fourth quarter. The Bulldogs' keyed on Person in a 21-9 home win. 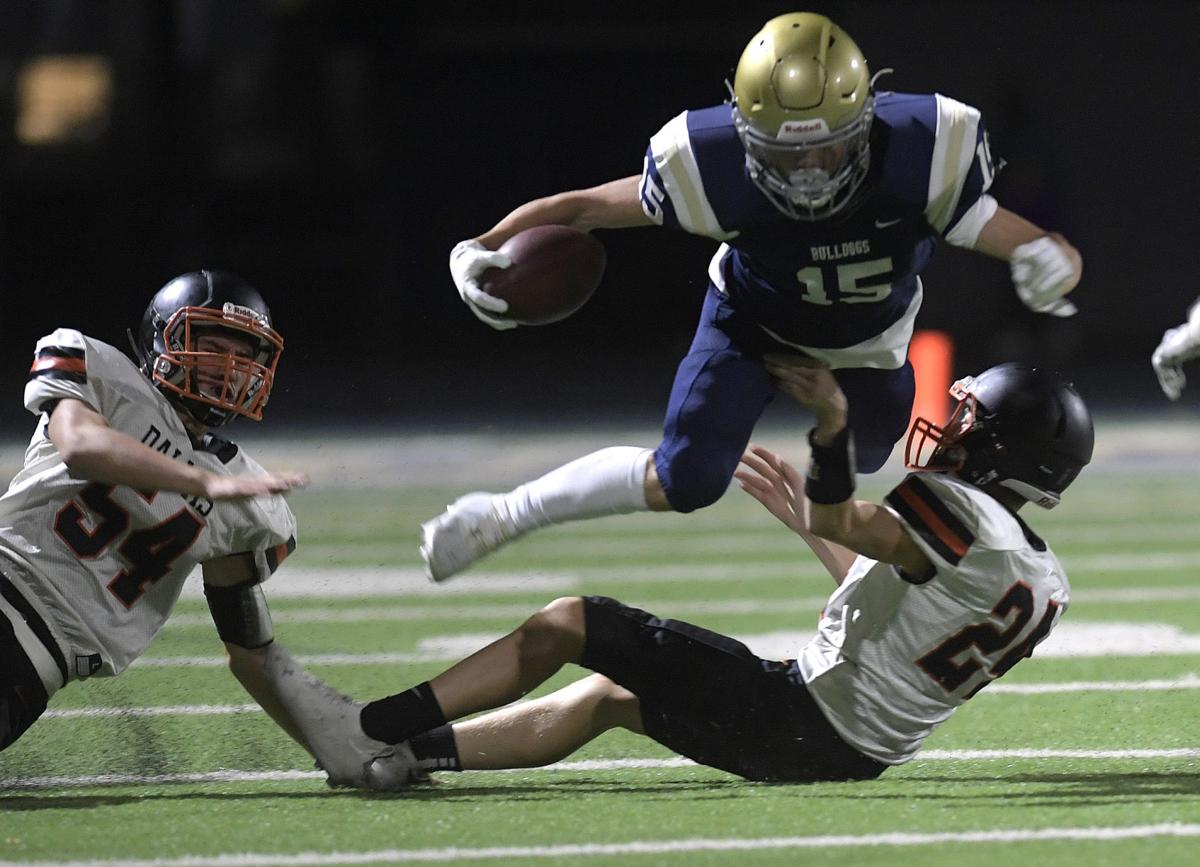 West Albany's Tyler Hart-McNally dives over Dallas Kaden Moore while gaining a first down for the Bulldogs. Hart-McNally, a freshman, scored on a 61-yard touchdown reception from Michael Cale in the second quarter. 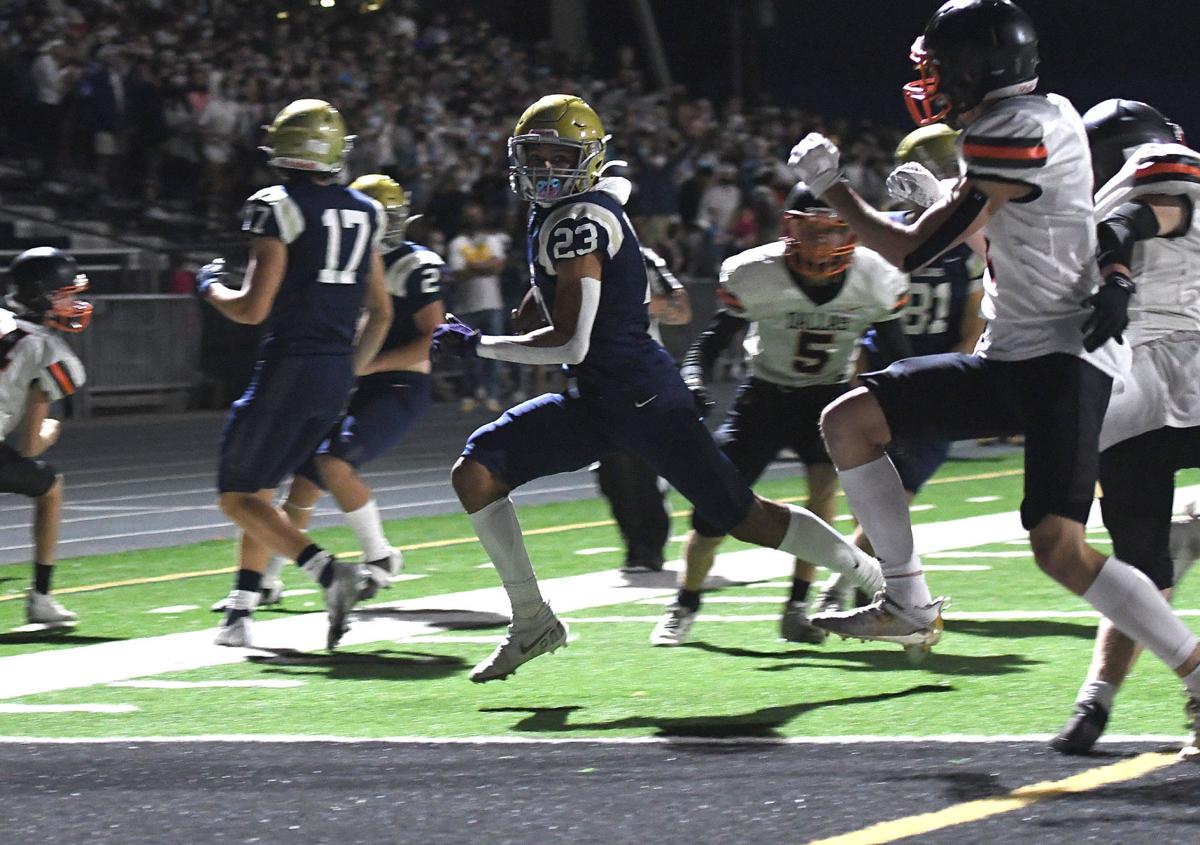 West Albany's DeMarcus Houston (23) scores a touchdown in the first half to close out the game's scoring. He also had an interception and three catches.

West Albany High’s offense put up points to take the lead in the first half Friday night then leaned on its defense to complete the task against a Dallas squad that seemed capable of breaking a big play at any moment.

But that big play never came, and the top-ranked Bulldogs kept their record clean with a 21-9 win in the Mid-Willamette Conference football opener for both teams at Memorial Stadium.

“It’s really nice to see everything come together,” said West wide receiver and defensive back Riley Paxton. “We work really hard in practice. For us to have a dominant first half like that and our defense finish it off is nice to see.”

But from there, the Dragons had just two good chances to score. Those drives were snuffed out by a DeMarcus Houston interception late in the second quarter on a play from the West 37 and a turnover on downs early in the fourth after reaching the Bulldog 39.

“To hold that team to nine points is really impressive. I thought we settled in kind of midway through that second quarter, third quarter was awesome, fourth quarter was awesome,” West coach Brian Mehl said, praising his defense for slowing down the Dallas wing-T offense and a dual-threat quarterback like Ashton Foster. “So proud of them, and battling tough for the win and playing how we know how.”

West, which also got its first two wins in comeback fashion by a total of seven points, did its damage in the first half on offense then played Dallas to a scoreless second half.

The Bulldogs grabbed the lead back after the Dragons’ early field goal when Michael Cale hit Paxton for a 45-yard touchdown. A Dallas defender went for the interception on the right flat and missed, leaving Paxton to turn up field and run for the end zone.

The Dragons answered right back, led by the running of Logan Person and the passing of Foster.

But on West’s next play from scrimmage, freshman running back Tyler Hart-McNally took a short Cale pass and sprinted down the left side for a 61-yard touchdown.

“We thought we could get some plays off of that. You let that guy get out on the numbers and he does special things,” Mehl said.

The game turned quickly, as three plays later Paxton picked off Foster, and a short return had the ball at the Dallas 14. Three more plays and Houston hit pay dirt with an 8-yard touchdown run on a sweep.

Dallas then drove from its own 20 to the West 37 before Houston hauled in an interception in the final minute of the half.

The Dragons put together a promising drive late in the third quarter, reaching the Bulldog 39. But a short-yardage run, a 6-yard loss on a pass play and another pass for no gain led to a punt.

Dallas was stopped on downs at its own 34 on its next possession, but West was unable to turn the opportunity into points.

Person, the center of the Dragons’ offense, finished with 61 rushing yards on 20 carries and five catches for 18 yards.

“Really just watching the guards,” Bulldog lineman Carson Benedict said of the key to slowing down Person. “The guards kind of took us to the ball. As long as we stayed and did our assignments, it was basically right to them.”

For the better part of two games, West has had to get creative trying to run the ball.

Starting running back Marcus Allen went down early in last week’s game at Canby with a leg injury. Teammate Anthony Vestal stepped up and finished with 40 yards on 12 carries.

Friday, the Bulldogs spread the ball around, led by Houston’s three carries for 37 yards and Hart-McNally’s seven attempts for 26 yards. Vestal was bottled up for 3 yards on seven carries. Allen didn’t play but was on the sideline.

“We’re searching for the right thing,” Mehl said. “We want to run the ball and we want to play good defense, so we’ve got to control the ball on offense but still get the big plays that we’re needing to hit for us to be the team that we need to be late.”

Cale finished 8-of-19 passing for 159 yards with two touchdowns and an interception. Hart-McNally had two catches for 71 yards, Paxton two for 56 and Houston three for 26.

“We all get along really well,” Paxton said of Cale, a second-year starter, and the receivers. “Michael’s a great leader. Practice after practice you get better and better together and you come together more and more.”

Foster was 18 of 26 for 155 yards and an interception. Kolby Johnson-Sallee was his top target, hauling in five catches for 60 yards.

Here is a look at the high school football games in our coverage areas on Friday and Saturday.

Here is a look at the high school football games in our coverage areas this weekend.

West Albany High passed another test Friday night, showing off a balanced offense even without its top running back available for a second str…

West Albany's Noah Reese (1) and Dakota Monson (55) bring down Dallas' Logan Person behind the line of scrimmage on a fourth-down play in the fourth quarter. The Bulldogs' keyed on Person in a 21-9 home win.

West Albany's Tyler Hart-McNally dives over Dallas Kaden Moore while gaining a first down for the Bulldogs. Hart-McNally, a freshman, scored on a 61-yard touchdown reception from Michael Cale in the second quarter.

West Albany's DeMarcus Houston (23) scores a touchdown in the first half to close out the game's scoring. He also had an interception and three catches.