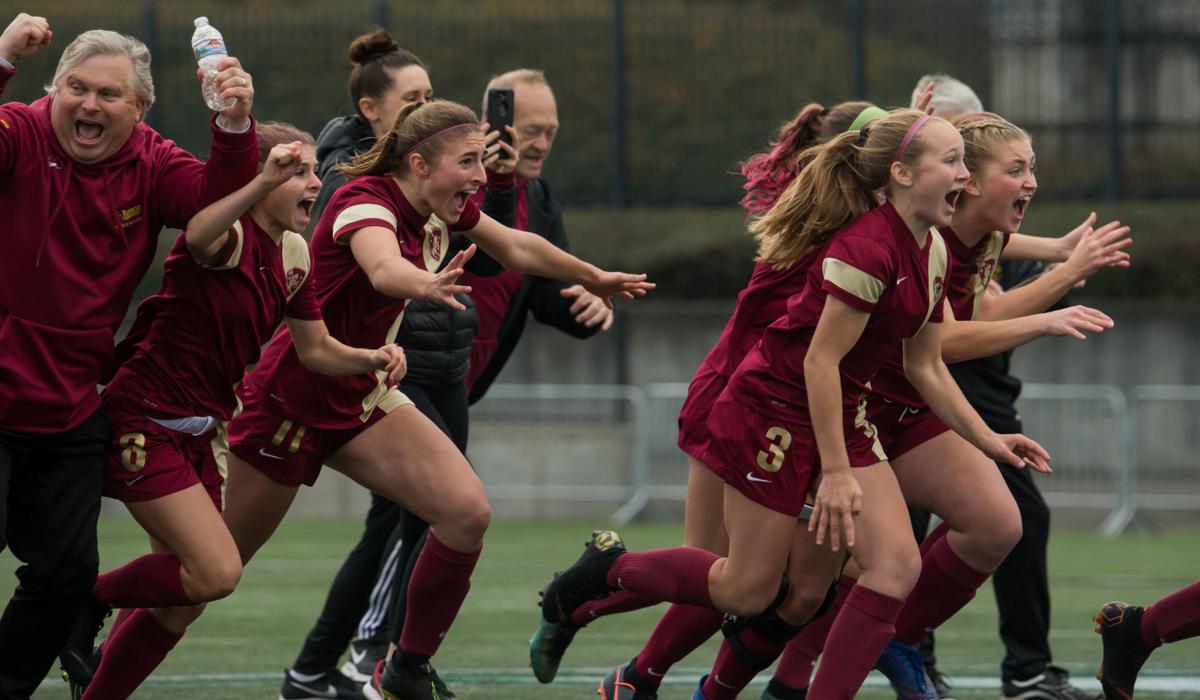 Raiders players rush to celebrate with Ana McClave after she scored the winning penalty kick in Crescent Valley's state title win against Wilsonville. 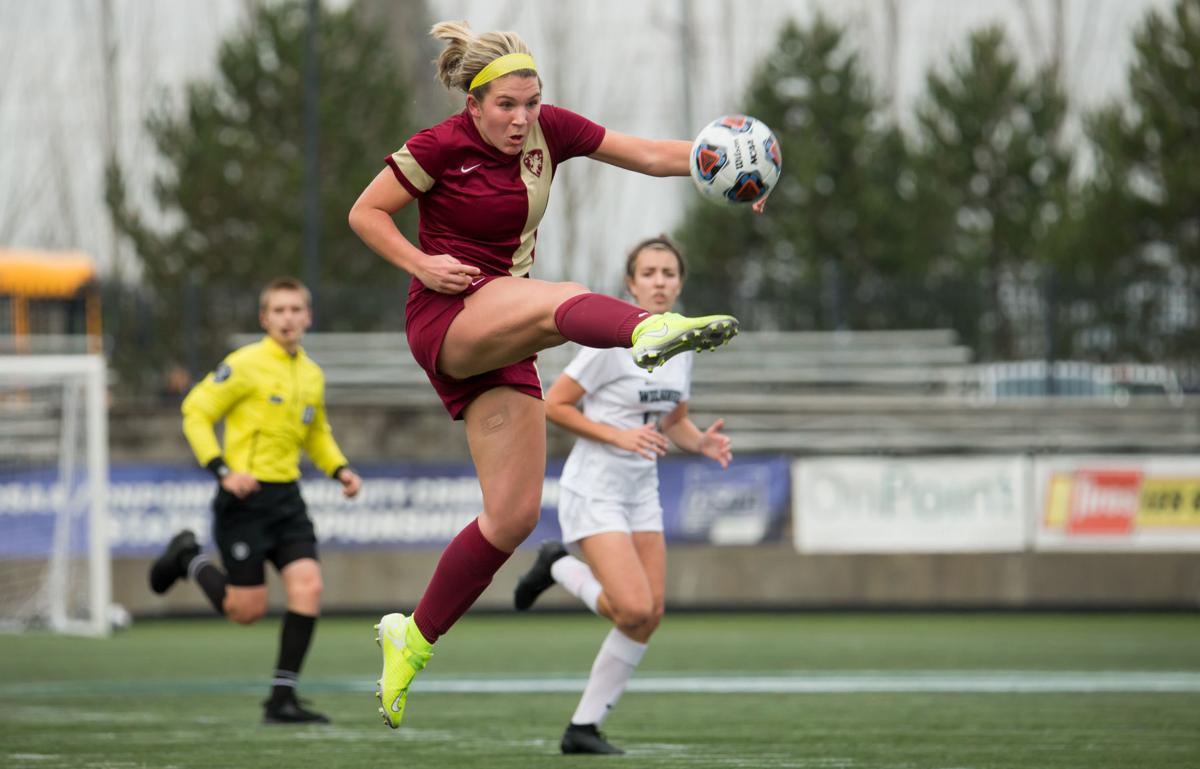 Ana McClave gets off a shot early in the 5A state title game against Wilsonville. The shot was blocked, but McClave wound up with the game-winning penalty kick to give the Raiders their second straight championship.

HILLSBORO — Crescent Valley High’s pillar, as coach Blake Leamy describes it, was everything the Raiders needed and more Saturday afternoon.

The defense’s backline and keeper Peyton Dale were at their best in a game where CV’s normally strong passing and offensive movement rarely materialized.

That left a state championship to be decided on penalty kicks, and the Raiders had the upper hand.

Ana McClave sent her fifth-round shot into the left side of the net to give Crescent Valley its second-straight OSAA 5A girls soccer state title with a win against Wilsonville at Hillsboro Stadium.

“It wasn’t even stressful, it was more confidence,” McClave, a junior, said of the experience of PKs and having the season come down to the one-on-one matchups. “I knew we were going to win.”

Not much came on offense from either side through 80 minutes of regulation.

Dale made her most difficult stop when she slid to collect a ball just in front of the net with about 10 seconds left in the second 10-minute overtime period. Early in the first 10 minutes, Lindsey Antonson got away from CV’s Jada Foster, Antonson’s defensive shadow for most of the game, and fired a shot that skimmed the top of the crossbar.

So it came down to penalty kicks, with the top-seeded Raiders (15-2-1) leaning on Dale, who missed a few minutes in the first half after taking a cleat to the abdomen.

Foster answered with a goal after one for third-seeded Wilsonville (13-5-1) in the first round of PKs with a grounder through the right side. Antonson then hit the underside of the crossbar but the ball didn’t break the line, and Megan Brunelle gave the Raiders the lead with a shot to the left that Wildcats keeper Kendall Taylor got a hand on but couldn’t stop.

Wilsonville’s Karina Borgen tied the score to open the third round, but CV’s Claire Macy couldn’t answer with a low shot to the right stopped, and it remained 2-2.

Katelyn McDougal missed a shot left of the goal, and Raiders freshman Nicole Huang put her team back ahead with a shot high into the right side.

Wilsonville’s Araxi Tejeda-Martinez kept her squad alive by finding the left side to tie it before McClave finished it.

“I chose a spot and I went to the right spot and it went in,” McClave said, crediting the confidence shown by her coaches and the work the team puts in practicing penalty kicks.

Leamy said his team felt the pressure of being the defending state champions all season.

“Just the weight of expectations, thinking we could do it again. We got everybody’s best game, and today the kids just gutted it out.”

Added Foster: “Every team did come for us every time because we were number one in state.”

The back line of Foster, Brunelle, Sydney Berrey and Wilson, along with Macy, the Mid-Willamette Conference player of the year, in the defensive midfield held up well against Wilsonville, which had a significant edge in shots but didn’t produce many dangerous ones. Dale, a senior and third-year starter, cleaned up whatever came her way to keep the match scoreless through 100 minutes.

“It’s pretty much senior-laden,” Leamy said of the defense, “and they’re just smart, intelligent players. They know how to cover, they’re very disciplined. Jada Foster, she’s just an amazing player and she covered for us a lot.”

There were few scoring opportunities in Saturday’s first half.

In the sixth minute, Dale went high to grab a shot from the baseline.

Soon after, Dale chased down a ball in the outer corner of the 18-yard box. She arrived just as a Wilsonville player kicked the ball. Dale made contact with the opposing player and fell to the turf, where she stayed for several minutes while she was attended to by coaches and an athletic trainer.

Anna Wilson came on in relief and was tested several times in the roughly four-minute period before Dale returned to the field.

Dale stopped a shot by Wilsonville’s Camryn Pettenger-Willey in the 26th minute. McClave sent a high shot toward the goal in the 35th minute that was corralled by Wildcats keeper Kendall Taylor.

The second half saw a little more action and work for the keepers.

Dale went high in a crowd to haul in a corner kick in the 59th minute. A few minutes later, Wilsonville’s Brighton Ring sent a shot over the goal.

Dale stepped in front of a Wilsonville player to stop a scoring attempt on a kick into the box in the 71st minute. McClave had a shot sail over the goal in the 75th minute.

In 2018, Crescent Valley was the 10th seed in the bracket. The Raiders defeated 7 seed Wilsonville 2-1 in the first round on their way to a championship, which they took with a 3-2 overtime win against Churchill.

Crescent Valley was the 2006 state runner-up under coach Andrew Donaldson.

A fall to remember with five title teams

Led by an ultra-talented group of underclassmen, the Corvallis High girls cross-country team captured its first ever state title in the fall. …

Raiders players rush to celebrate with Ana McClave after she scored the winning penalty kick in Crescent Valley's state title win against Wilsonville.

Ana McClave gets off a shot early in the 5A state title game against Wilsonville. The shot was blocked, but McClave wound up with the game-winning penalty kick to give the Raiders their second straight championship.