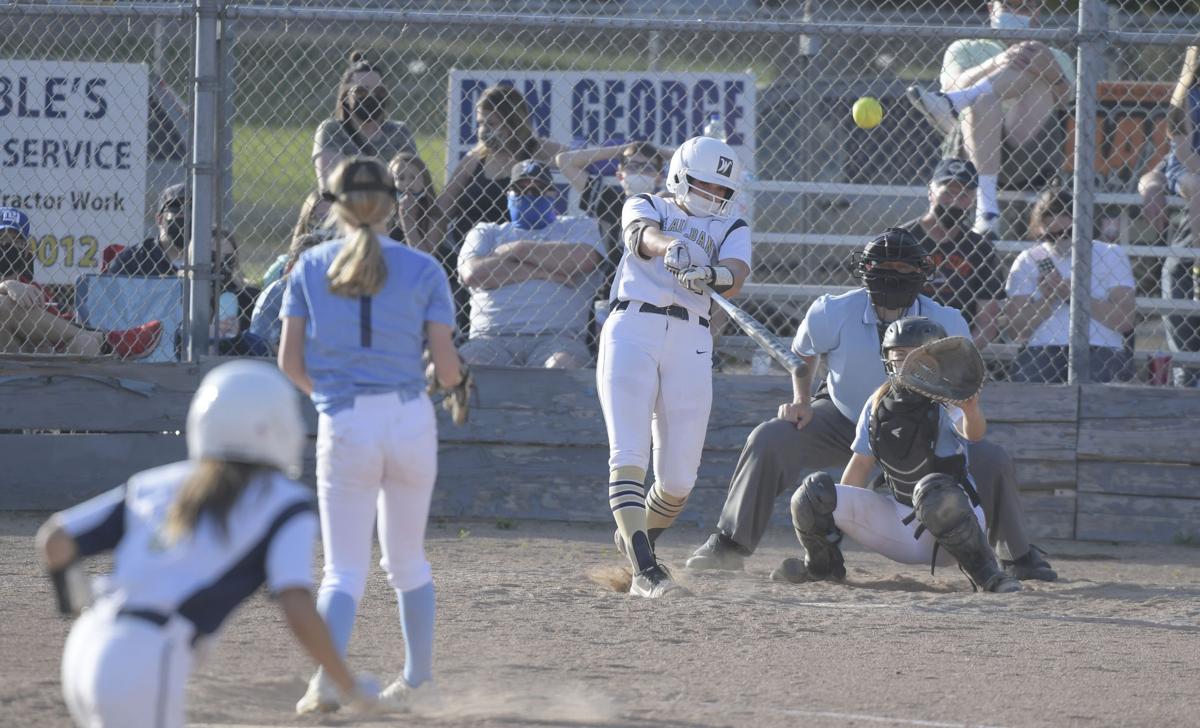 West Albany's Presley Jantzi hits a grand slam off of Corvallis pitcher Holland Jensen. The Bulldogs had six extra-bases hits in all in a 9-5 win against the Spartans. 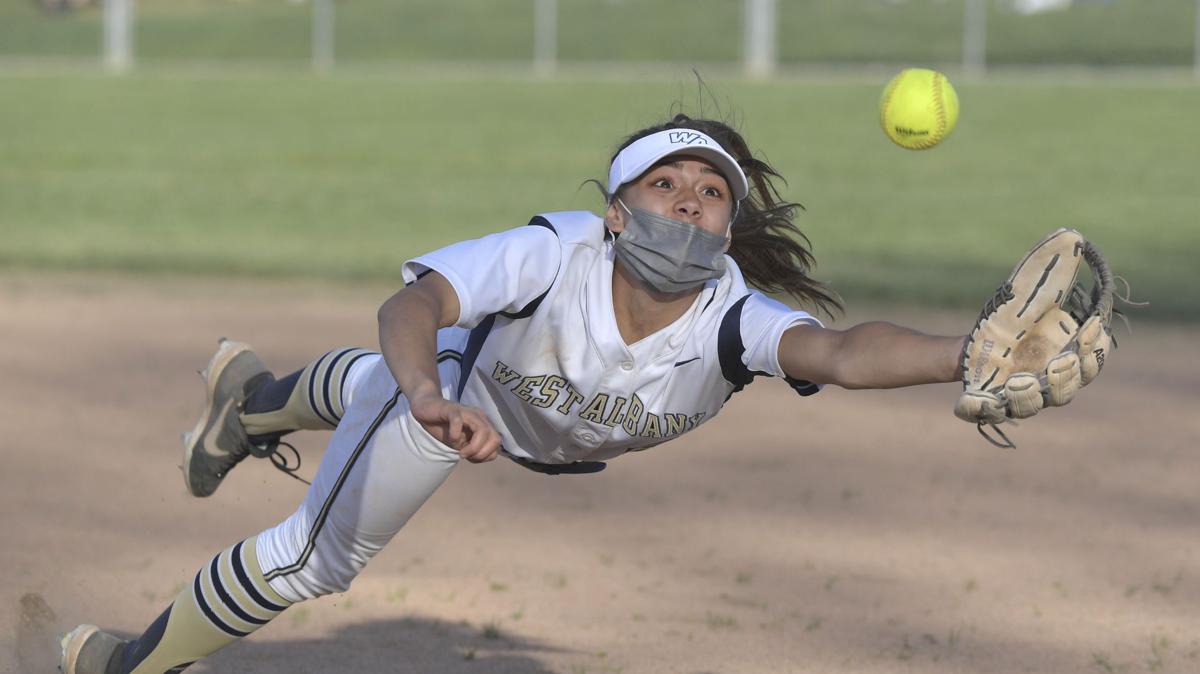 West Albany's Riley Ramirez makes a diving attempt at a ball during the Bulldogs defeat of Corvallis. 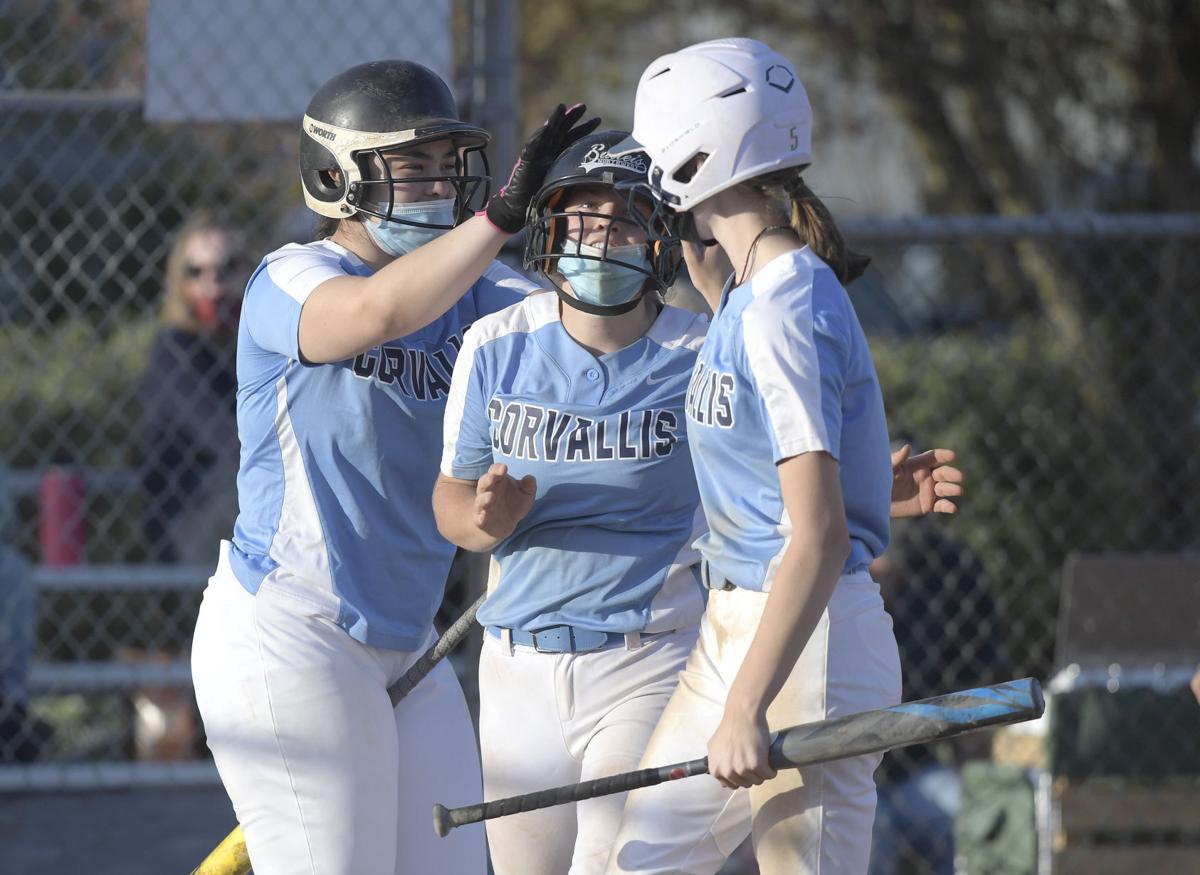 Corvallis had some spark in the bats too, just not enough to keep up with Bulldogs.

West pounded six extra-base hits Wednesday — including two home runs — to the visiting Spartans’ three to push its way to a 9-5 win in a Mid-Willamette Conference softball game.

“That’s a usual thing. I think one through nine we’re strong and every girl has the power to hit it over the fence,” said West senior Presley Jantzi, who had a fourth-inning grand slam that extended her team’s lead to 9-3. She also had a triple, going 3 for 4 overall.

Fellow senior McKenzie Kosmicki, who took the ball from Jantzi in the fourth to finish the game in the circle, had a home run and a double. Riley Ramirez added a triple and Sidnee Holloway a double.

Twenty-six of the Bulldogs’ 52 hits this season have been at least two-baggers, and they’ve piled up at least 12 hits in every game.

“What makes our offense so potent is … we’ve got several girls that can play small ball, bunt for hits, so their defense maybe has to come in and take that away. Then we just swing away and pop it over their head,” West coach Ryan Borde said. “We’ve got some girls that can flat-out swing. They buy into our hitting philosophy. More than anything it’s not us coaches, it’s these girls. Their work ethic has paid off and you see it when they’re at the plate.”

Following Hannah Jensen’s one-out double in the sixth, Corvallis’ Piper Love hit a two-run homer to close the gap and make the game interesting at 9-5. Calla Krummel also had a double for the Spartans.

Like West, Corvallis has had some first-year varsity players making an impact. Among those for the Spartans is freshman Holland Jensen.

She pitched a complete game Wednesday and has been her team’s go-to in the circle this season. She walked three and struck out two and retired eight of the last 10 batters she faced against the Bulldogs’ front line players.

“She’s battled through tough situations, continued to throw hard, continued to make adjustments within the game to get her pitches moving better,” Corvallis coach Sami Arnst said. “She’s kept such a calm demeanor the entire time it’s hard to tell she’s a freshman. We’re excited about what she’s doing.”

But the Spartans weren’t able to extend some rallies that could have made for a tighter score. They had eight hits in all to the Bulldogs’ 12.

“We had a lot of opportunities with people on. It was one hit away or just getting under it and not getting the middle,” Arnst said.

The Bulldogs’ youth includes freshmen Serena Hattori, who had three hits and one RBI in the 2 hole in the lineup, and catcher Kylie Carapinha. Also on that list are junior Kendra Kosmicki, whom Borde describes as a big addition to the team and sophomore Emma Daniel, who hit two home runs against Thurston.

Ellie Babbitt and McKenzie Kosmicki had two hits and two RBIs apiece to complement the three hits each from Hattori and Jantzi.

For Corvallis, Hannah Jensen and Krummel both had three hits and Love two.

The Spartans scored in the top of the first on Hannah Jensen’s RBI single to right field. With Ramirez’s triple to center to get them started, the Bulldogs answered with three in the bottom half on run-scoring hits by Hattori, Babbitt and McKenzie Kosmicki and never trailed.

Borde calls seniors Babbit, Jantzi, Ramirez and McKenzie Kosmicki “the heart and soul” of his team and says that the Bulldogs will go as far as the foursome will take them.

The pandemic eliminated the 2020 spring season and unfortunately, because of COVID-19, that won’t include an opportunity to chase a 5A state title this year either. But that hasn’t dampened the enthusiasm of a group of seniors determined to make the best of it.

“COVID took a lot away from us last year but coming into this year we had a goal of winning every game, especially with no state playoffs,” Jantzi said. “We’ve had a lot of the same girls for four years and it’s our time to shine now.”

Will the Houston Texans have the worst record in the NFL?

Will the Houston Texans have the worst record in the NFL?

NFL rookie to make full recovery after being shot

NFL rookie to make full recovery after being shot

Had Monday’s game gone to the team that scored in more innings, South Albany High would have been the clear winner.

Without an opportunity to showcase its high-level talent against the rest of the best 5A squads in the state, the Crescent Valley High cross-c…

Season-openers can be a mixed bag of results as teams continue the process of shaking off the rust and building chemistry.

Prep track and field: Aiden Paul has left his mark and is looking for more

Aiden Paul is headed off to Stanford University, his “dream school,” later this year.

West Albany senior infielder Presley Jantzi was named the 5A softball player of the year by a vote of the state’s coaches.

West Albany's Presley Jantzi hits a grand slam off of Corvallis pitcher Holland Jensen. The Bulldogs had six extra-bases hits in all in a 9-5 win against the Spartans.

West Albany's Riley Ramirez makes a diving attempt at a ball during the Bulldogs defeat of Corvallis.