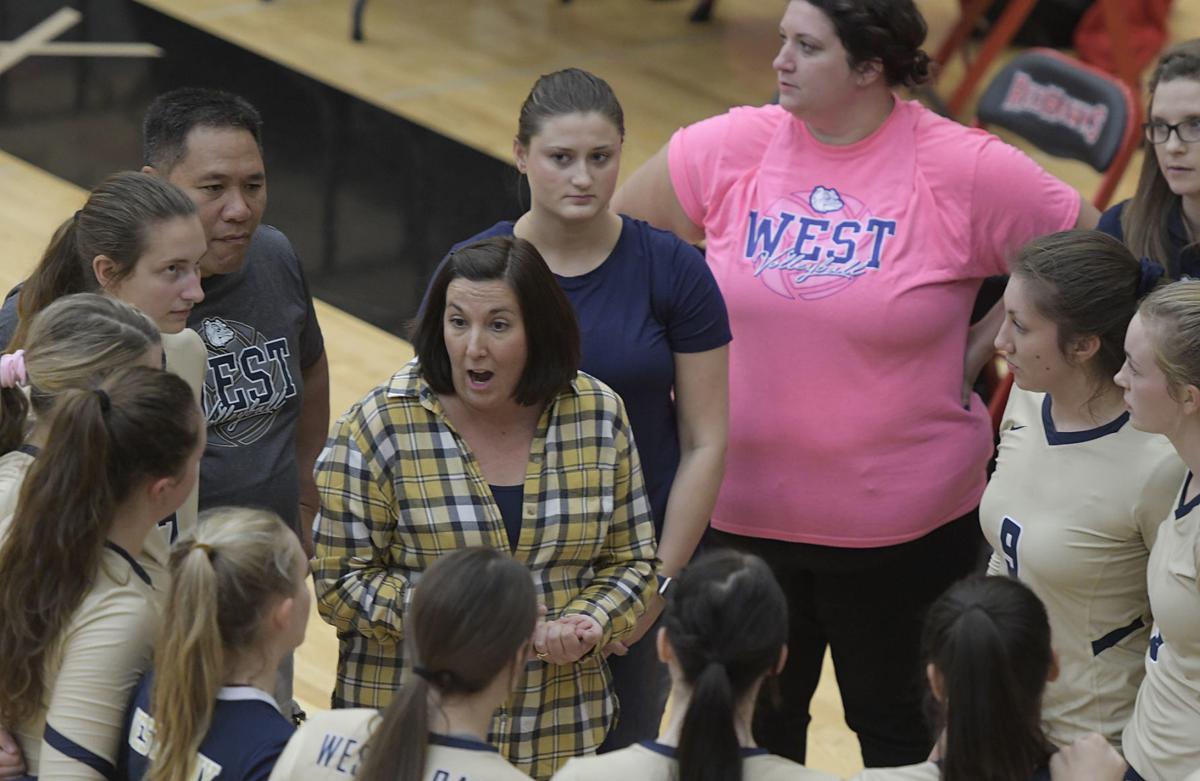 West Albany coach Kelli Backer talks to her team during a 2018 match. Backer has decided to step down as coach to focus on her health and family while continuing to teach at the school. 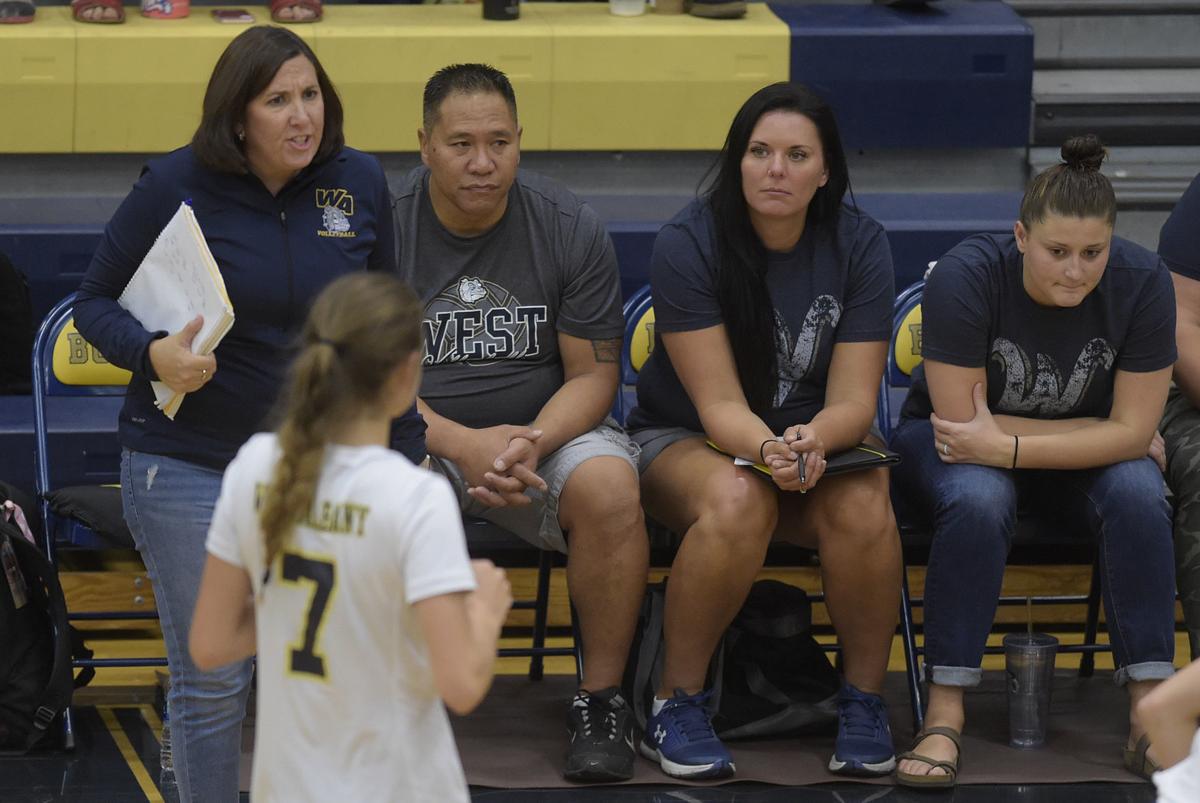 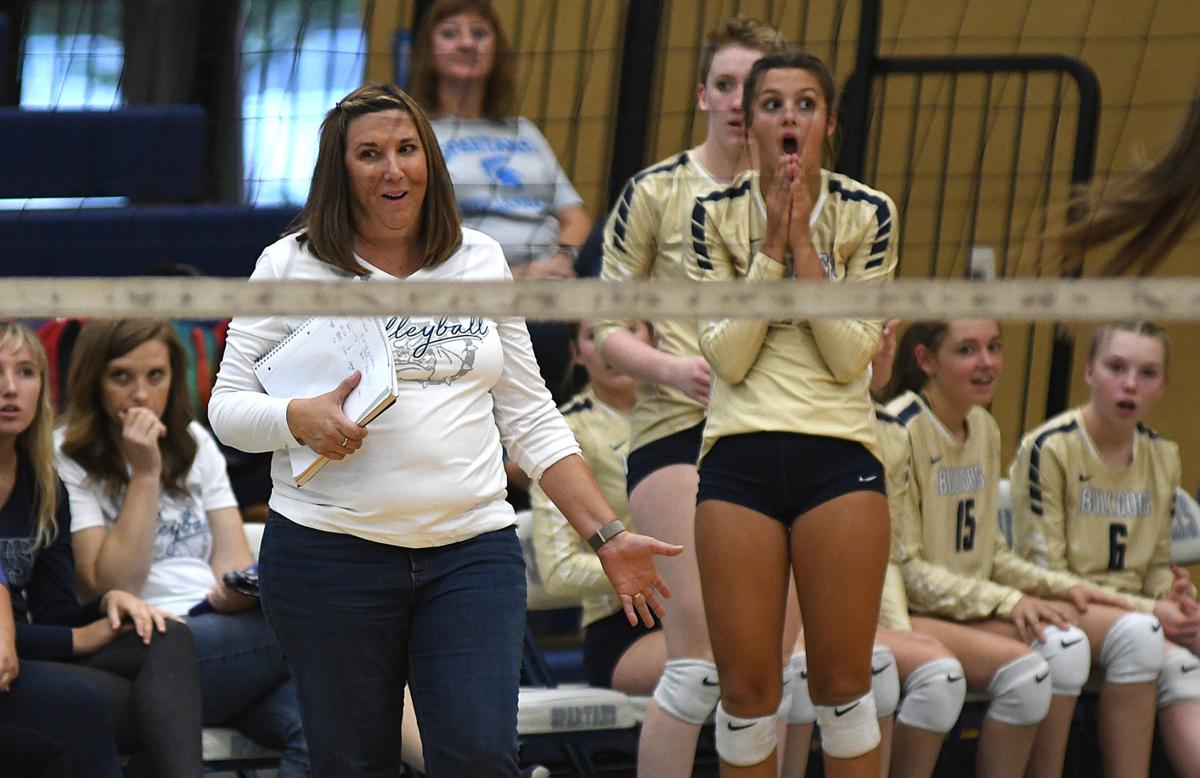 It wasn’t an easy decision but one that Kelli Backer ultimately came to the point that she was ready to make.

After more than two decades in the West Albany High volleyball program, most of that as head coach, Backer has stepped down to focus on her health and her family while continuing her science teaching position at the school.

Backer has missed time each of the past two volleyball seasons for surgeries related to soft-tissue sarcoma in her hip. Recovery has been slow after the most recent surgery, and there’s a possibility that she might have to have another.

“I decided for my sake and my recovery that would be best, and for the team not to have to go through that journey a third time,” she said.

Backer’s tenure leading the program, which began in 1996, has been filled with success. Her teams have finished fifth or better 10 times in the past 14 seasons, including 5A state titles in 2012 and 2013 and a third-place 6A trophy in 2014.

Backer’s final season included a share of the Mid-Willamette Conference title with Corvallis and longtime friend and colleague Steve Hyre, and a fifth-place state finish after a loss to the Spartans in the third-place match.

“The entire West Albany community owes Kelli a great debt of thanks for all that she has done to encourage countless student-athletes to perform and compete at the highest level,” West athletic director Patrick Richards posted on the school’s Facebook page. “She has instilled in her athletes the desire to win while promoting the greater purpose of high school athletics by teaching sportsmanship, personal accountability, and the value of the pursuit of excellence in the classroom.”

Backer isn’t leaving a team with a bare cupboard in any sense. The 2019 roster had 12 non-seniors, including all-tournament selections Elijah Sanders and Hannah Stadstad.

“They have a huge amount of potential, lots of girls returning,” Backer said. “Whoever takes over the program is going to have a great group to start up with. I knew they would be OK.”

In 2000, she took a few years away from coaching to have children (daughters Bailey and Sydney). She returned as an assistant coach under Dani Blackwell for three seasons before taking over as head coach again in 2006.

The 2007 season began a stretch of eight straight trips to the state quarterfinals for the Bulldogs. They placed fifth twice, then fourth, third and runner-up in 2011 before dominant runs in 2012 and 2013 in which West lost just one set in three state tournament matches each season.

Her teams produced NCAA Division I players Tani Stephens (2012 grad) and Payton Rund (2014) in addition to countless other collegiate players.

Hyre was Backer’s junior varsity coach at West for six seasons before going to Corvallis.

“I love Kelli as a person and as a coach,” Hyre said. “I’ve been fortunate to be involved with good people and good programs.”

Backer had the opportunity to coach both her daughters.

Sydney, a libero, is a current West senior. Bailey, a setter, graduated from West in 2018 and played one season at Chemeketa Community College. She was a Bulldogs JV assistant last fall and is following in her mother’s footsteps as a teacher.

“Coaching your own children, it’s wonderful and at the same point it presents challenges that you don’t have with other athletes,” Backer said. “But it’s definitely been volleyball their whole childhood. They were with me in the gym when they little, running around.

“It’s been such a wonderful thing to share with my girls. It’s hard to see it come to an end. But I’m reminding myself that the next chapter is about to begin. I wouldn’t have changed anything. I loved every minute of my coaching, especially coaching my girls.”

That new chapter includes a transition from the sidelines to the stands.

It will be hard change, Backer says, but a necessary one. It will be difficult to let go, especially with players she has developed relationships and a bond with over several years.

She sees the transition as just another life lesson provided through sports.

“The girls that are coming back are pretty special to me. They’re just a special group. I can’t imagine not getting in the gym and watching them play,” she said. “It will be different, but it needs to be different.”

Corvallis High brought two of the best hitters in the state to the net Tuesday night and West Albany answered the challenge.

West Albany coach Kelli Backer talks to her team during a 2018 match. Backer has decided to step down as coach to focus on her health and family while continuing to teach at the school.