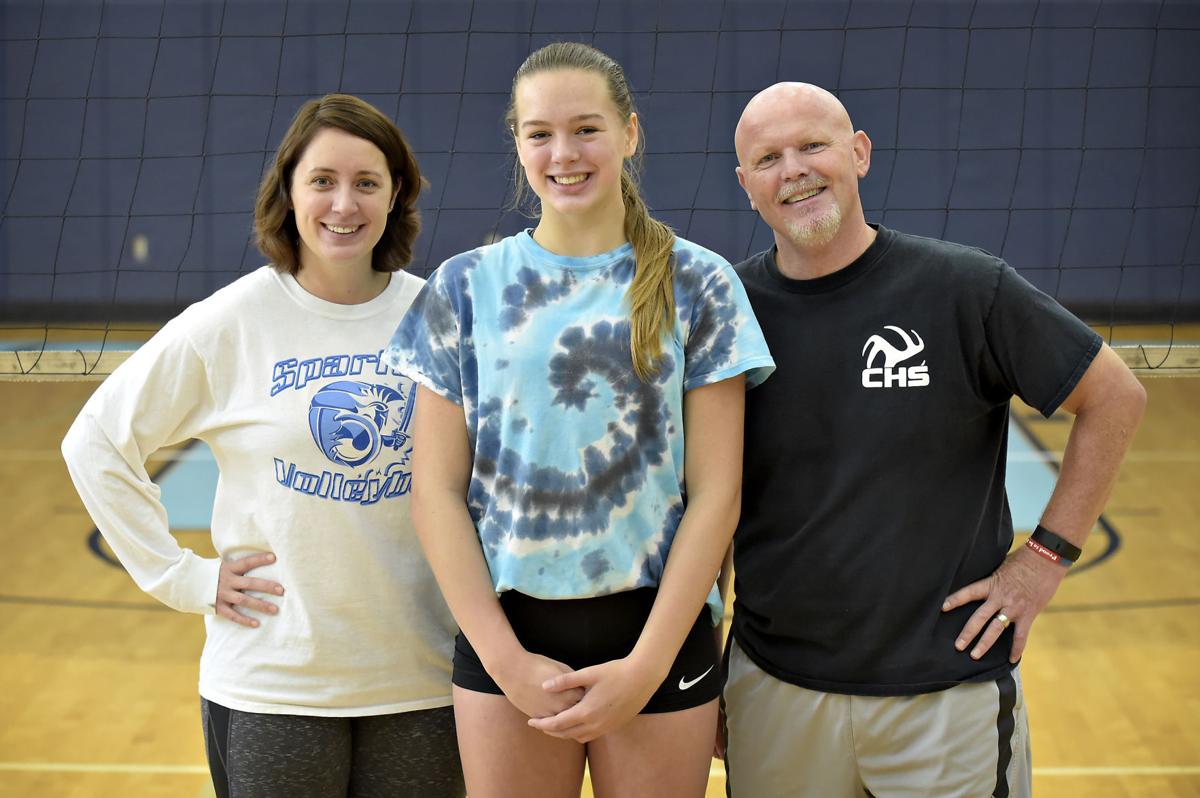 From left, Nicole Gregg, Ryann Gregg and Steve Hyre are three generations involved in the volleyball program at Corvallis High. The Spartans host a 5A state playoff game against Pendleton at noon Saturday. 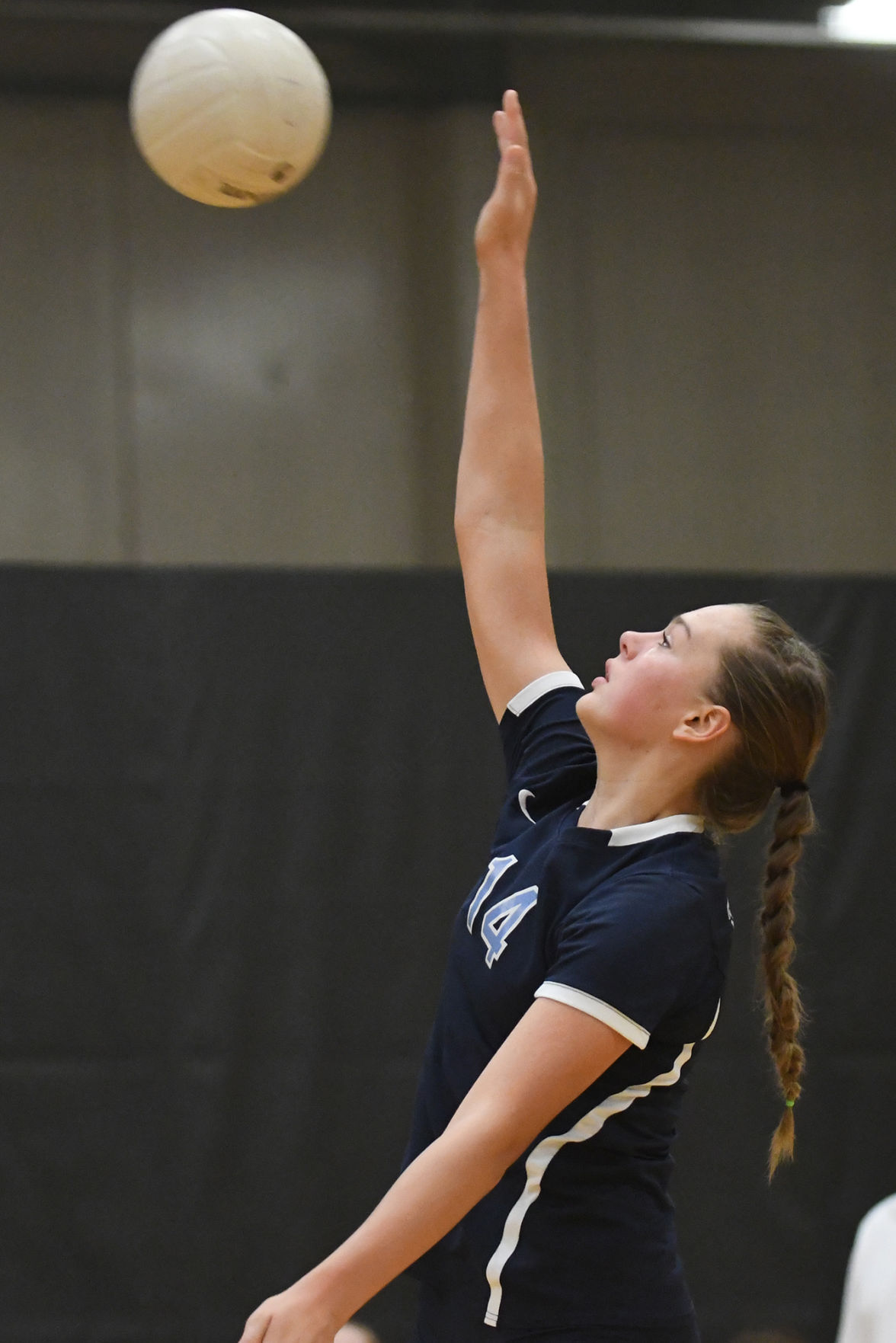 Corvallis freshman Ryann Gregg is being coached by her grandfather, Steve Hyre, and mother, Nicole Gregg, this fall.

Steve Hyre was coaching volleyball at South Albany High two decades ago when his daughter Nicole played the sport at Corvallis High.

Because of his own schedule, he only got to see her play twice a year, when their teams played each other.

In recent years, with his granddaughter Ryann Gregg showing signs that she could possibly be a varsity volleyball player as early as a freshman, Hyre wanted to make sure he wasn’t tied up with other responsibilities when Ryann took the court as he was when Nicole competed.

He expected to be just a grandpa sitting in the stands, but then life took a turn.

In 2013, Hyre had the opportunity to leave West Albany, where he spent six years as an assistant in a highly successful program under Kelli Backer, to be the CHS junior varsity coach under longtime friend Ryan Case.

This fall, in his second year as the Spartans’ head coach, he's with his granddaughter on the court and his daughter — Nicole, Ryann’s mother — beside him on the bench as a volunteer assistant.

“I never would have thought that was going to happen,” he said. “It’s been fun because I have the luxury of not only being able to coach but to be right there front row and being able to watch this process.”

Hyre coached his granddaughter during two club volleyball seasons, including last year with the Salem-based North Pacific Juniors. Nicole Gregg coached Ryann on a Boys & Girls Club team three years ago but stepped away to let her get coaching from others.

It’s been an enjoyable season for all three, as the Spartans are one win from reaching the OSAA 5A state tournament. Co-Mid-Willamette Conference champion Corvallis (22-2) hosts Pendleton (9-11) at noon Saturday in a round-of-16 game.

“I adore both of them, and it’s just a really fun experience to share something that I love with something that they love,” said Ryann (pronounced like Ryan), who has been playing volleyball since third grade and club since fourth.

Hyre was concerned with the repercussions and reactions to his granddaughter playing on varsity. Nicole had those same concerns, anxiety and hesitation but says, “I kind of feel silly for it now because it’s been great.”

Ryann, a hitter and blocker, is a regular contributor for the Spartans and one of the Mid-Willamette’s top hitters.

“I definitely think she proved herself. She proved herself in tryouts and in open gyms over the summer,” said CHS senior Ellie Belton, a cousin to Ryann. “I think it really showed that she was ready for this level of competition and that she does deserve a spot on varsity.

For Nicole, this season has brought back memories of her own high school playing days when she sees the excitement on the players’ faces. She coached most of them through the Boys & Girls Club when they were as young as fourth-graders, adding a valuable knowledge of the players.

Nicole, whose husband is CHS alum and former Major League Baseball pitcher Kevin Gregg, says she didn’t think much at the time of her father not getting to watch her play much during high school.

“Now that I see what we have I realize, ‘this is cool. We didn’t have this before,’” she said. “I’m glad that we’re making it happen. I really am.”

Coming into the fall, Ryann had played club volleyball with CHS sophomore twin sisters Kylynn and Taylor Quinn. She had familiarity with Belton and had talked with some of the other Spartans players leading up to the season.

But other than that the team was completely new to her. Ryann was joining a veteran group set on getting to the state tournament after falling one win short in 2015.

She was the new face and worried about being accepted. She let her play speak for itself and was excited once she felt like she was part of the team.

“I’m so competitive I see everything as a challenge,” Ryann said. “It’s so satisfying to be able to play against the older girls and have that competition and not let my age step in the way.”

Hyre saw that talent two years ago, at about the same time Ryann felt her skill level take a jump and created a desire in her to pursue a future in the sport.

Ryann likes having her mom around because “she definitely knows her stuff. It’s nice to have someone to turn to that I’m comfortable with.”

She didn’t expect her grandfather to be her coach, but both agree that it’s worked out well.

Their relationship on the court is as coach and player. Like the rest of the team, she calls him Steve.

“Beyond that it’s different,” Hyre said. “Sometimes she gets in the court mode and still calls me Steve. But I’m not worried about that. I know I’m her grandpa.”

From left, Nicole Gregg, Ryann Gregg and Steve Hyre are three generations involved in the volleyball program at Corvallis High. The Spartans host a 5A state playoff game against Pendleton at noon Saturday.

Corvallis freshman Ryann Gregg is being coached by her grandfather, Steve Hyre, and mother, Nicole Gregg, this fall.