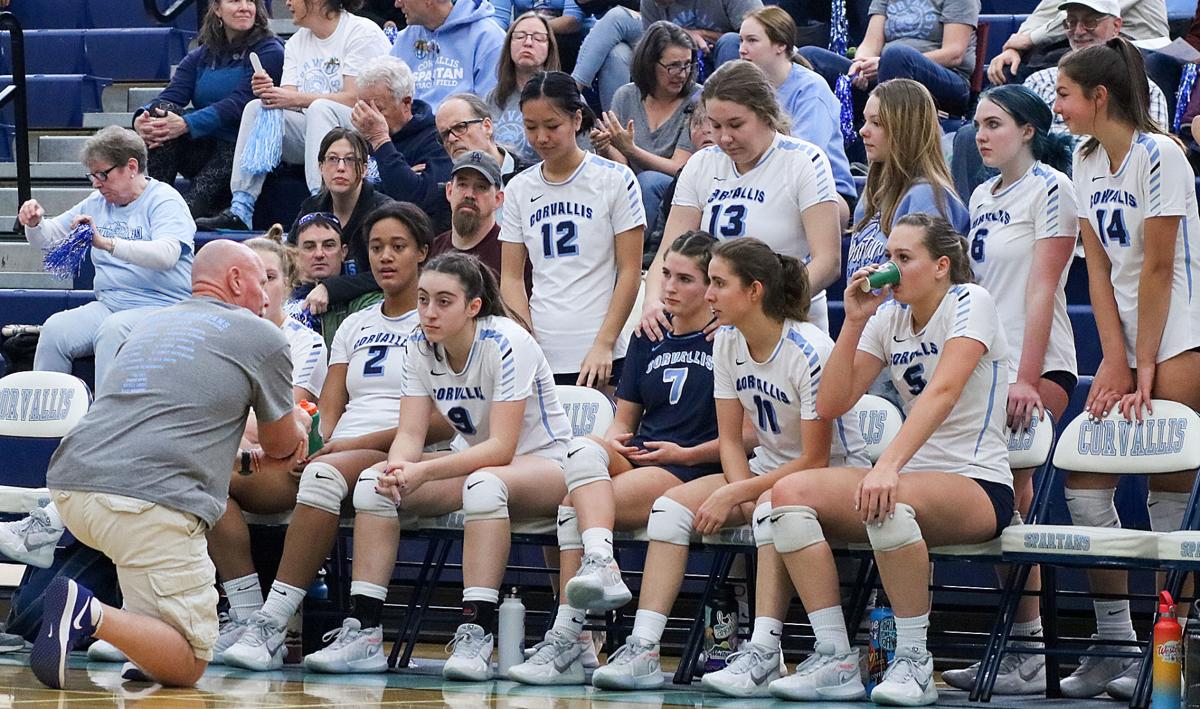 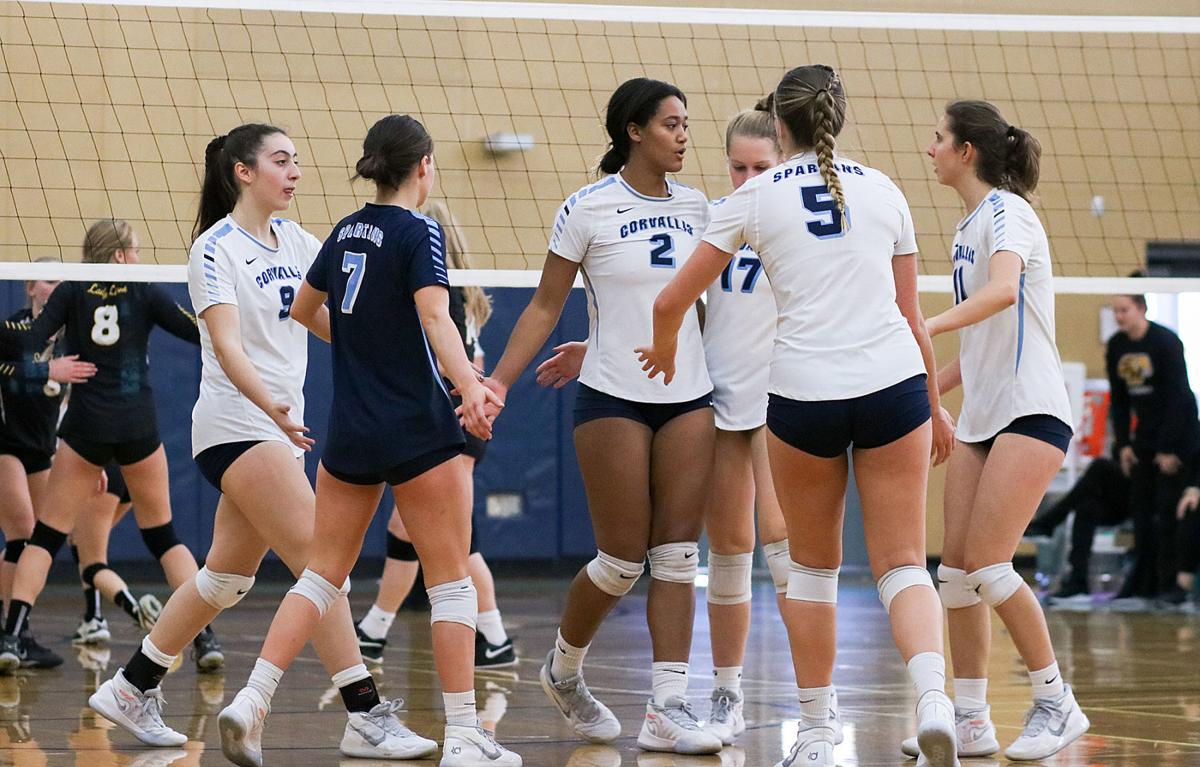 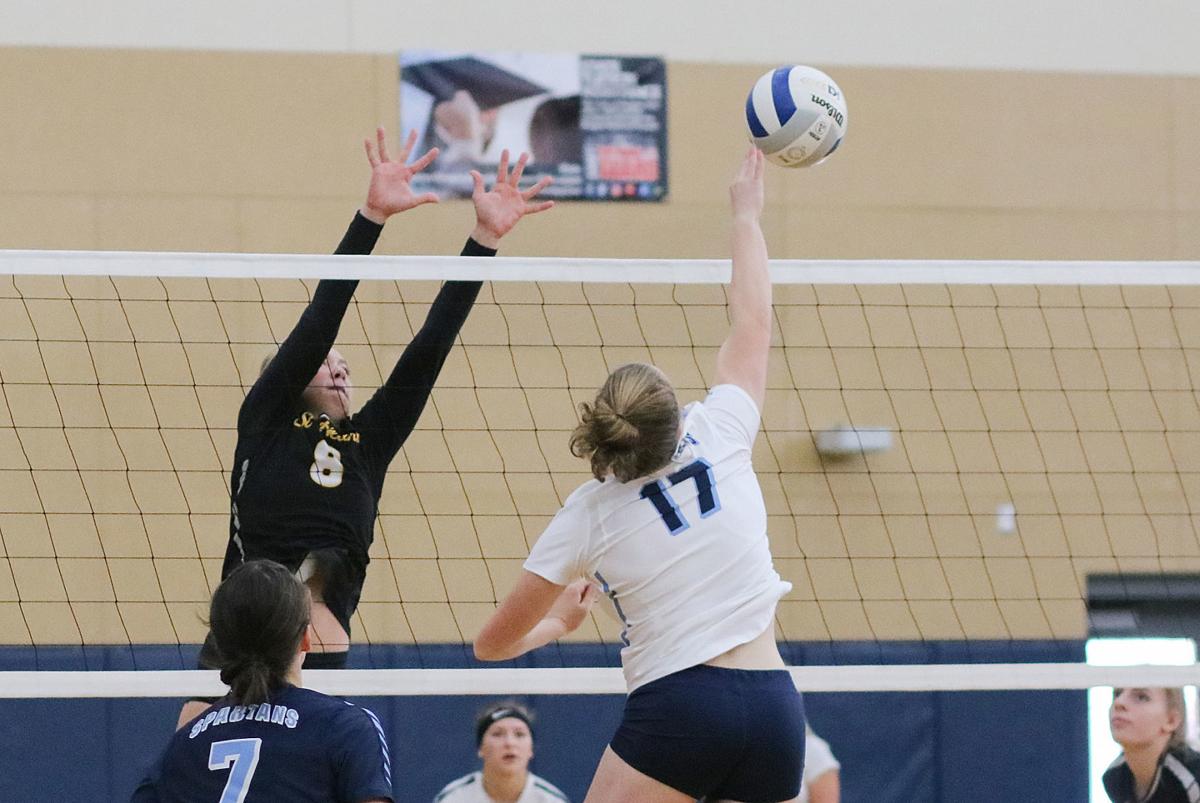 Corvallis Senior Taylor Silbernagel (17) hits the ball over the net during matchup versus St. Helens.

It didn’t go perfectly, but Corvallis High got the job done to set up a run at another 5A volleyball state title.

A win was never in doubt as the Spartans swept visiting St. Helens on Saturday afternoon in an OSAA round-of-16 match.

Corvallis (17-4) had some errors in each set that kept it interesting. But the Spartans just had too much firepower, led by all-state seniors Nevaeh Bray and Ryann Gregg in the front row.

“It’s always good to have adversity,” said Gregg, who had a team-high 18 kills along with four digs. “I feel like it brings us to a different state mentally, believing in ourselves. Everything this year has been confidence, believing that we can really repeat what we did last year.”

The Spartans had a dominant 2018 run, losing just four sets to 5A competition on their way to the state title.

They lost six seniors, including five that played prominent roles. In their place, the newcomers have filled those roles better than could have been imagined, Gregg said.

"I’m very pleased with this group, very proud of this group because, yes we had Ryann and Nevaeh coming back, but it takes more than two kids,” said Corvallis coach Steve Hyre. “The other kids have earned their badges as the season’s gone on, the ones that this is their first varsity experience.”

Hyre said his team has progressed well since the start of the season.

He changed the lineup after a three-set home loss to West Albany on Sept. 10 in the team’s second Mid-Willamette Conference match. The Spartans were later pushed to five sets in a win at South Albany, but they’ve swept every other conference match, including West Albany in an Oct. 15 three-way league meeting at Dallas.

“We depend on everyone, on and off the court,” Bray said. “We realize now it takes 13 to win every single game. It’s not the six on, it’s not just Ryann and I. It’s every single person.”

Corvallis and St. Helens also matched up in last year’s round of 16 with Corvallis getting a home sweep.

Saturday, the fourth-seeded Spartans trailed during just one stretch, as the 13th-seeded Lions (12-9) jumped out to a 4-2 lead in the second set with the help of three mistakes by the home team.

But that changed quickly as Corvallis reeled off nine straight points and a 14-2 run to erase any doubt. Gregg had three kills and Simmons three aces in that initial 9-0 run. The Spartans went deep into their bench in the second and third sets but had little trouble scoring.

Hyre praised Bennett, a junior setter and transfer who has improved and become more comfortable in Corvallis’ fast attack. He also singled out junior Michaela Berning, a versatile option as a hitter or blocker.

Corvallis opens its state tournament run with a 1:15 p.m. Friday quarterfinal at Liberty High School against fifth-seeded Crook County. The semifinals are Friday night and the championship match Saturday night.

“We have all the talent in the world. We’re so capable of doing this,” Gregg said. “It’s just actually getting us to believe and play like we know we can.”

Corvallis and West Albany proved once again to have two of the best 5A volleyball programs in the state.

Ryann Gregg’s college volleyball career is sneaking up on her.

When longtime Corvallis High volleyball coach Steve Hyre stepped down earlier this year, the school didn’t have to look far to find his replacement.

Corvallis Senior Taylor Silbernagel (17) hits the ball over the net during matchup versus St. Helens.