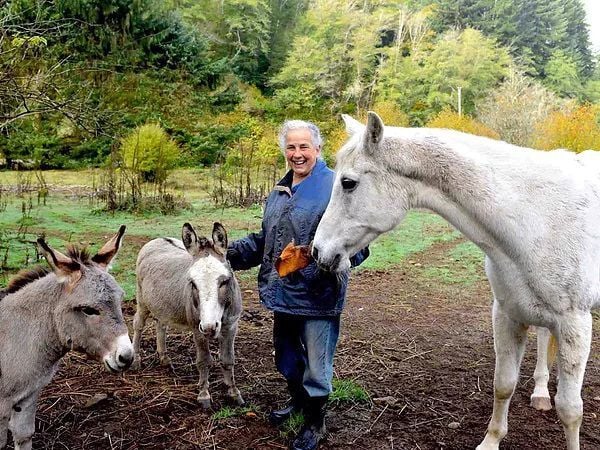 Carol Van Strum, photographed at her home in Five Rivers. She won the David Brower Lifetime Achievement Award in 2018 for her environmental battle against Agent Orange. 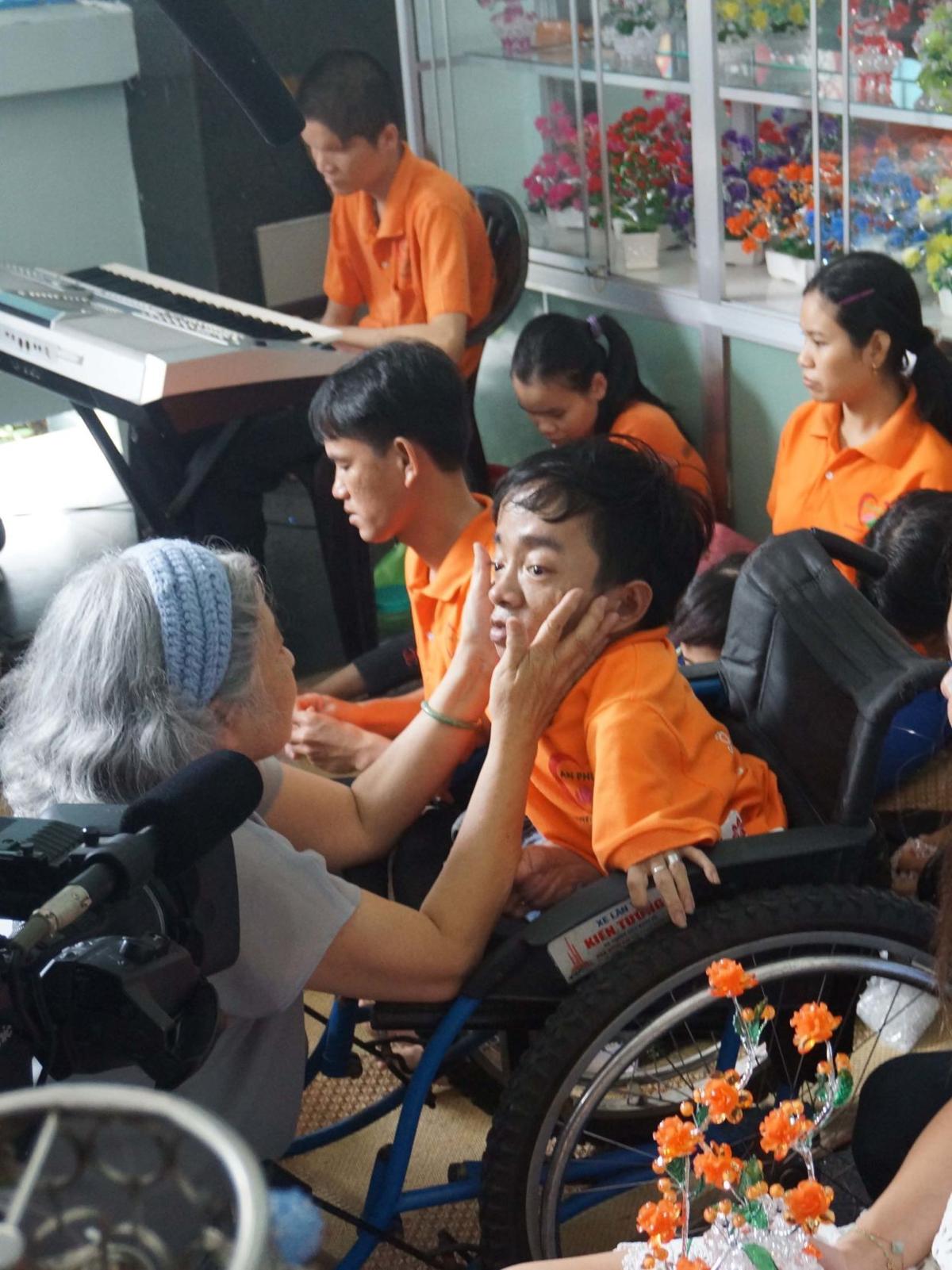 Tran To Nga (left) in Vietnam with a fourth-generation victim of Agent Orange birth defects. 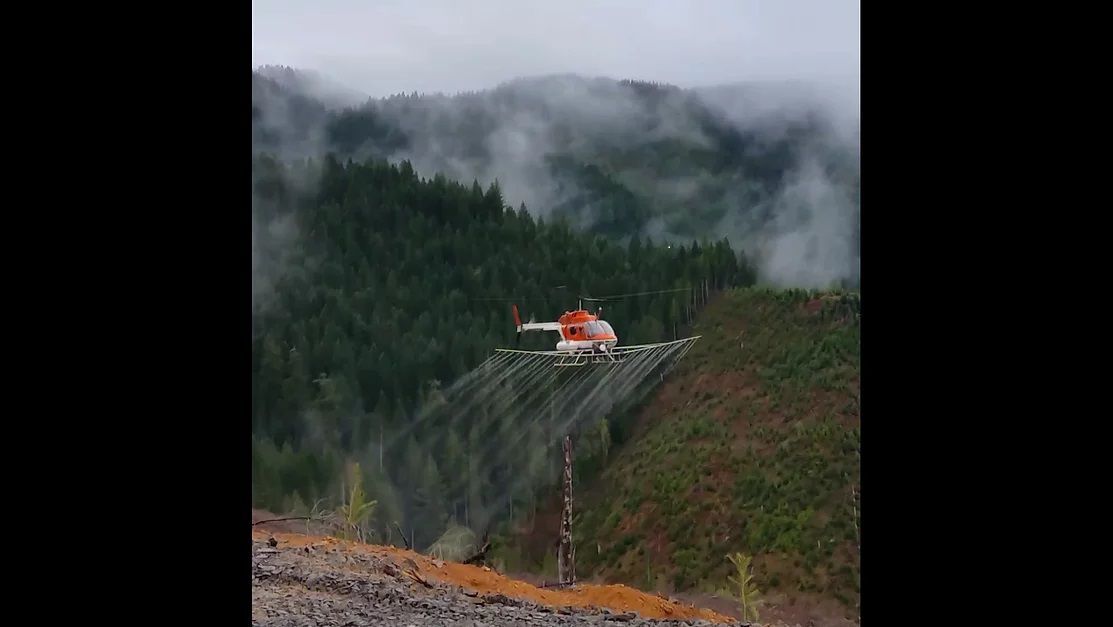 A still shot from the film "The People vs. Agent Orange" shows a helicopter spreading the herbicide.

JENNIFER MOODY For the E

Officially, the Vietnam War ended for the United States in 1975.

What many Oregonians don’t know is that one of its most deadly weapons simply followed them home.

Agent Orange, the toxic herbicide combo developed to defoliate the jungles and expose the enemy to American bullets, did its job so well it drew the attention of researchers for the timber industry. Chemicals that take out weeds and broadleaf trees from the air? Conifers stay standing? Hey, we could use something like that here for our Doug firs in the Pacific Northwest.

That idea sets the stage for “The People vs. Agent Orange,” a documentary by the husband and wife team of Alan Adelson and Kate Taverna.

The film, which took about a decade to complete, is being shown by the Darkside Cinema in Corvallis through a special virtual preview screening through Jan. 28 just for Oregonians. Tickets are $12, with discounts available for veterans and others; see the website at https://darksidecinema.com/ for more information.

PBS also is scheduled to show the film on June 28.

Why a special preview for Oregonians? Because the war moved here in the early 1970s, and here it continues, Adelson said.

“We had received so much extraordinary help from people in the Corvallis and coastal Oregon region that we decided to give them a first look at the film before it would go national,” he said in a phone interview from his home in the Catskills.

“We wanted to bring the film home to its origins. And the Darkside Cinema, which is a superb community institution, responded to that notion most enthusiastically.”

Paul Turner of the Darkside said he heard about the documentary from people involved in the film.

“Being part of this community, this felt like an important movie for people to see,” he said.

The concoction known as 2,4,5-T was found to be highly contaminated with dioxin because it was produced at high temperatures. The other, 2,4-D, contains dioxin in other forms. Arguments continue as to whether how much, if any, is safe to use.

Rural Oregonians affected by the spray — which washed down hillsides into watersheds — have been fighting back for decades. They’ve gathered stacks of documents detailing miscarriages, birth defects and dead and malformed wildlife. They’ve circulated petitions, led protests and filed suits.

They’ve had small and temporary successes: a brief injunction against 2, 4,5-D, before the EPA terminated its use in 1985.

But the active ingredient in more than 750 herbicides is still 2, 4-D, Adelson said, and its safety continues to be disputed. “Half of Agent Orange itself continues to be used in herbicide formulas today.”

As Faulkner wrote, the past is not dead. It’s not even past.

That’s the premise of the documentary, which tells the story of the continuing fight for protection from poison through the perspectives of two women in particular: Carol Van Strum of Five Rivers, near Alsea and the Siuslaw National Forest just west of the Benton County line; and Tran To Nga, a Vietnamese activist who was exposed to Agent Orange during the war.

Van Strum, now 80, won the David Brower Lifetime Achievement Award in 2018 for her environmental battle, which she continued in spite of horrific losses to her family that the documentary quietly reveals.

Reached at her home for a brief phone interview, Van Strum said she hopes people who view the documentary will be “outraged” by what they learn.

“It didn’t just happen here. It happened all over the place, and it’s still going on,” she said. “I hope the film might bring some awareness that weapons of war, especially chemical weapons, are also weapons against the environment and are incredibly destructive. Then, for a double whammy, they take those weapons in agriculture against the earth itself. It’s pretty warped. There’s something rather despicable about the whole idea.”

Van Strum said she’s seen the documentary once and said she doesn’t remember her role in it as much as that of her counterpart, Tran To Nga.

“I think it did an amazing job of pulling together various elements and somehow mixing them in a way that tells a story,” she said.

Adelson said when he first began researching the film, he had no idea Van Strum existed — or of the chemical spraying going on in Oregon forests.

The filmmaker, whose office is in New York City, said he was approached at a party by a young actress who worked with Vietnamese children whose parents had been exposed to Agent Orange and had been born with severe deformities: heads the size of beach balls, arms and legs that ended in clubs if they grew at all, inability to walk and talk, cognitive delays and lack of development.

“I didn’t want to make the film,” he said. “I thought, Agent Orange is an old story and this is a world with new problems, many new problems. And I was resistant. I more or less said that.”

But then the woman pulled out her phone and showed him pictures of the children. That changed his mind.

“The investigative journalist in me started saying, ‘If these poor, suffering human beings were the result of conscious human action, then this is a story the world needs to hear.’”

Adelson’s research uncovered the work of Tran To Nga, who lost a toddler to the effects of the chemical and who is herself slowly being covered by cancerous tumors. She is suing some 26 multinational companies to try to force accountability. After six years of procedural hearings, attorneys are filing final pleadings later this month.

Van Strum wrote a book in 2014, “A Bitter Fog: Herbicides and Human Rights.” Her stacks of documents became a part of a trove of information known as “The Poison Papers,” an online resource of The Bioscience Resource Project and The Center for Media and Democracy.

“She fought the use of herbicides for a very, very personal reason,” Adelson said. “They were spraying her area. Her kids were getting sick, neighboring women were experiencing spontaneous abortions, cancer rates were spiraling upward and all of the people in her community were gathering to fight the use of the herbicide. She was instrumental in leading that movement and remains extremely active in helping that continuing effort to ban the aerial spraying of the herbicide.”

Van Strum agreed with that assessment.

And, she said, she hopes people who watch the documentary will join her fight.

“I sure hope that number one, people will get some inkling of how incredibly widespread this practice is. These things they’re spraying on our food, on our rights of way, on our playing fields, on people’s lawns — there’s absolutely no basis for declaring them safe.

“I hope people will see it.”

REVIEW: 'I Care a Lot' should scare plenty of senior citizens

“I Care a Lot” is incredibly good during its first 30 minutes or so. Then, it takes an abrupt left turn and becomes a film that doesn’t quite know what it wants to be.

While you're waiting to find out which film will take the cake at this year's awards, here's a look at past winners, beginning with 1944.

There are enough laughs in “Barb and Star Go to Vista Del Mar” to make you feel like you’ve had a momentary vacation from pandemics, politics …

Day is the reason to see this -- not the glossy, almost miniseries-like production that director Lee Daniels has crafted.

There’s a lot of color in “The Croods: A New Age” and the kind of innovations that would make the Flintstones drool.

Dark, upsetting and often foreboding, the drama contains moments that are so heartbreaking only someone who had been through them could find their essence.

The 50 best Lifetime movies, according to IMDb

To celebrate these iconic cable fixtures in their cheesiness and glory alike, here's a look at the best Lifetime movies ever, as decided by IMDb user ratings.

Carol Van Strum, photographed at her home in Five Rivers. She won the David Brower Lifetime Achievement Award in 2018 for her environmental battle against Agent Orange.

Tran To Nga (left) in Vietnam with a fourth-generation victim of Agent Orange birth defects.

A still shot from the film "The People vs. Agent Orange" shows a helicopter spreading the herbicide.