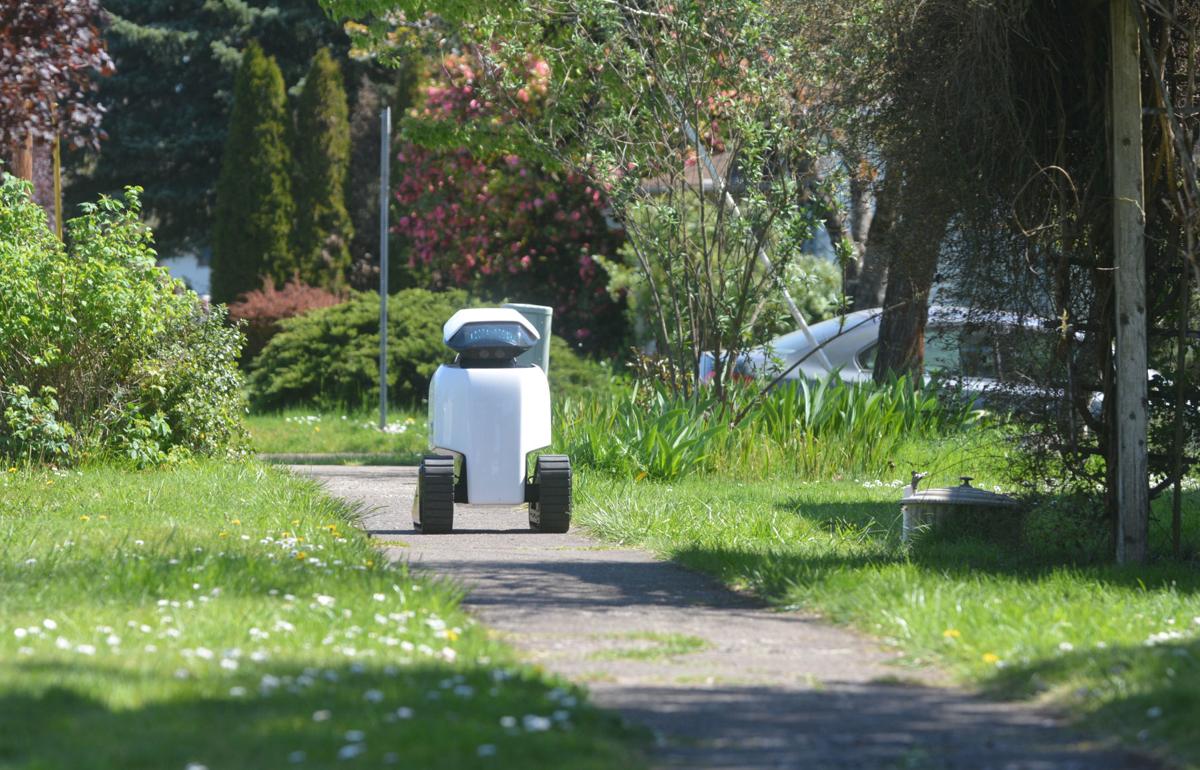 Dax rolls down College Street on Thursday afternoon to make a food delivery. 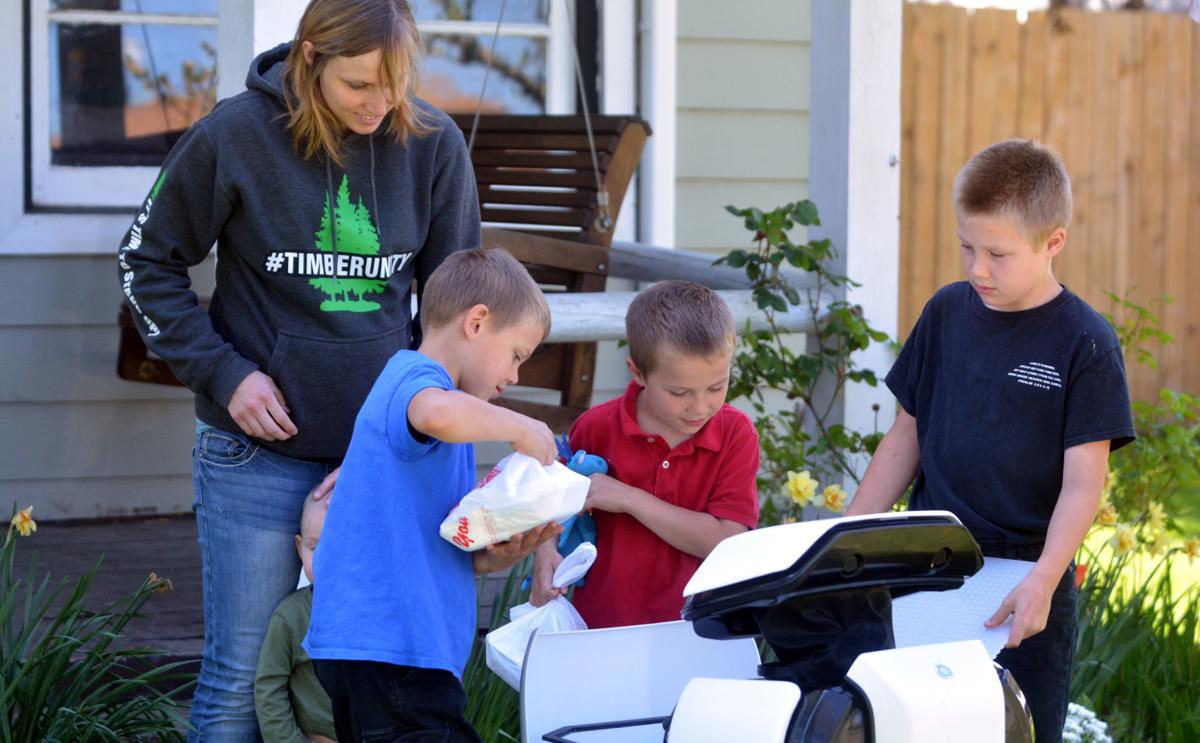 Dax delivers food from Vinwood Taphouse to a College Street address on Thursday afternoon. Shyanne Lafayette (not pictured) and her three sons, and Ruth Gray and her son (hidden in picture) all seemed excited to see a robot making the delivery. 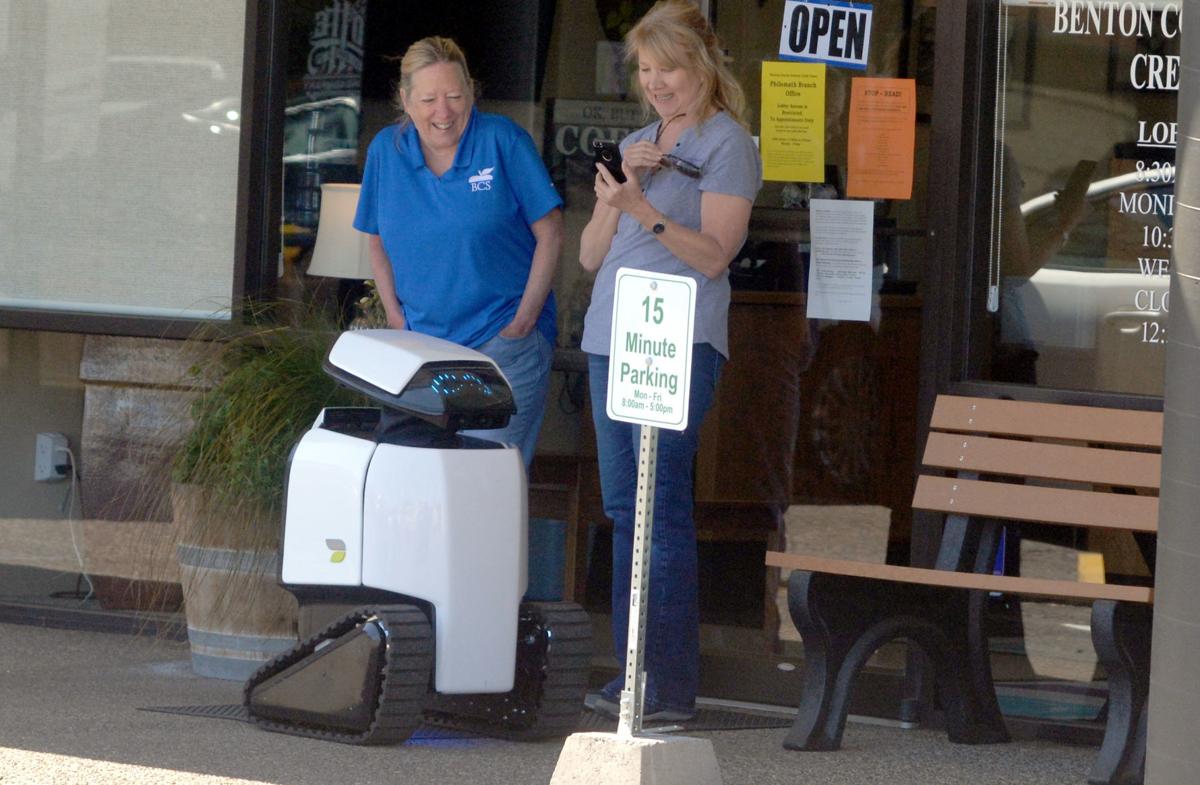 When the food arrived at the front porch Thursday afternoon at the Lafayette residence on College Street, the children had pretty big smiles on their faces.

Sure, maybe they were hungry and couldn’t help but be happy for lunch to arrive. But when you consider who was making the delivery, it’s easy to see why excitement surfaced in the moment.

Dax was on the job.

“People are using the service and so far it’s been going great,” Nova Dynamics founder Joseph Sullivan said about his company’s foray into delivery services. “With something as experimental as robotics, you expect to run into problems but so far, we’ve managed to avoid those. We’re delivering food and people seem to like it.”

Besides the kids, most of Philomath’s small businesses and residents likely appreciate the service as well. The coronavirus pandemic has created all kinds of problems and the little Nova Dynamics robot is trying to do his part to keep people safe.

“We get a lot of attention on the street, which I’m surprised about, because Dax has been running around on the streets for a while,” Sullivan said, a reference to extensive testing that’s been done in town over the past several months. “We seem to be attracting more attention these days.”

Dax started to make frequent appearances on local streets back in 2018, including food deliveries through an arrangement with La Rockita. Through those runs, engineers discovered various design issues that needed to be improved upon, including better rear visuals and reduced shaking.

“We learned an immense amount by doing deliveries at that time and we hit pause on the program to go back to the drawing board and fix all these problems,” Sullivan said. “Along the way, we ended up doing pretty much a top-down redesign of the whole robot. At one point or another, pretty much every system in the entire robot got touched.”

The company was just putting the final touches on this redesign when the pandemic hit with stay-at-home orders and restrictions on businesses.

The online retail giant dominates the delivered-goods market, which has taken business away from smaller businesses.

“Our idea for a long time has been, ‘hey, why don’t we give you not just next-day delivery but next-hour delivery from local shops?’” Sullivan said. “And then when the lockdown happened and we saw restaurants being shut down and things like that, we thought ‘OK, if we ever had a time to shine, that’s now.’”

Dax is not limited to transporting food but whatever can fit into his 13-by-13-inch drawer.

“If Dax can carry it, we’ll deliver it for free both to help out the community, also to help the businesses and also to get back in that place where we’re learning and we’re focused on a daily basis,” Sullivan said.

“I think it’s true in all product design or innovation that everybody has a perfect product or perfect invention until it hits real life,” Sullivan said. “So the more we can have Dax being used in a real-life situation, the more we’re going to learn from it and the quicker we can improve because it’s just natural for technicians and engineers to tackle the problem at hand. If the problem at hand is how do we serve people, then that’s the problem that gets addressed.”

A future design may include a way for Dax to push crosswalk buttons.

“He can see cars coming, almost as well as you and I can, and he can hear them coming,” Sullivan said. “The one handicap is he can’t push the walk button. Our plan is to give him an arm, at least a little paddle, that can kind of reach up like a duck wing or something and hit that button.”

As of last week, Nova Dynamics had five versions of Dax in operation, a number that could double by this week. Sullivan said it’s a fluid situation with the number of robots in service and the company just needs to see how things go with it.

As mentioned, the Dax deliveries are free. Not charging for the service, Sullivan said, is an example of the company’s commitment to goodwill in tough times. But there is more to that approach.

“We’re trying to improve a concept of robots trying to help people and we don’t want money to get in the way,” Sullivan said. “If people like it and it becomes a regular thing, once the crisis is over, obviously we’ll probably ask for a couple of bucks for a delivery or figure out some way to fund it.”

The delivery area in Philomath is limited as the service kicks off to make sure the company can keep up with demand. But Nova Dynamics plans to add to its service area as time goes on.

Nova Dynamics has not released an app just yet because of the layer of complexity it would add to the process.

“We just want to make this work and work really simply for people and so we put out this text number,” Sullivan said. “You’re texting with a real person and you say, ‘hey I want Dax at my house at 11 o’clock, he’s going to be picking up some bolts at the hardware store or a gallon of milk’ and then we just put it on our schedule.” (See the accompanying infobox for details on how to place an order).

After the pandemic restrictions are lifted and lives return to normal, Dax deliveries may or may not continue. Sullivan said he’d like to keep it up but there are other factors in the overall picture.

“I can’t promise anything exactly, especially as we’re talking to investors who are making technical changes and stuff ... there are a lot of moving pieces,” Sullivan said. “My wish is certainly that from this point on, Philomath can use Dax as a gofer. I’m sure there’s going to be some ins and outs as we continue building robots ... but I would love to see this keep going.”

• Contact the pickup location (Dax can go to any business in Philomath) and confirm that the business is OK with the robot making a delivery and verify that the items will fit in his 13-by-13-inch delivery drawer.

• Complete the purchase with the business (Dax cannot deliver payments).

• Once an order is all set up with the business, text Dax back and confirm your pickup time.

Dax rolls down College Street on Thursday afternoon to make a food delivery.

Dax delivers food from Vinwood Taphouse to a College Street address on Thursday afternoon. Shyanne Lafayette (not pictured) and her three sons, and Ruth Gray and her son (hidden in picture) all seemed excited to see a robot making the delivery.